Tina can help in that regard..
Top

I did try years ago, advice from a good grower at a BCSS Meeting, drilled out the growing point and was told it would produce lots of offsets. A few years later, I had a plant with a damaged growing point and one offset. There's quite a few named varieties of Pectinifera but all are basically the same plant. Grown well, it could be considered a columnar cactus if it ever lived long enough.
Stuart
Top

I agree with Ralph and others that is is a difficult plant to keep when young. I must have been lucky as mine survived for over twenty five years and my glasshouse goes down to 3 or4 C in Winter. Cannot comment on purposely damaging the growing point, but pic will show what happens when left to its own devices. Offset is about two and half inches in diameter. Cheers ps, it loves water in Summer. 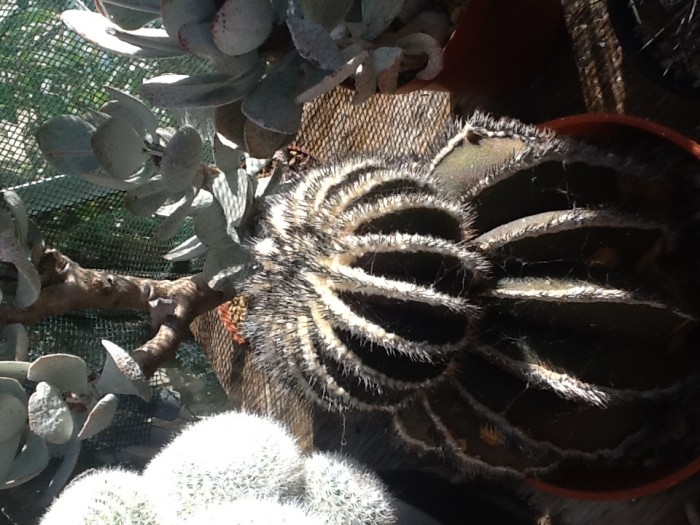 After "talking" with you I find my original mild annoyance and disappointment are dissipating to be replaced by a little enthusiasm... I do sometimes like a bit of a challenge! I will give it my best shot.

Which probably means it'll be dead in a month. But then again, you never know...

My point being I think this demonstrates the value of forums like this, thanks for your encouragement!

By the way Eric, I know such things are "in the eye of the beholder" but I think you have a thing of beauty there...
Top

I have a fine old plant of Uebelmannia pectinifera that is about 20cm tall with a bit of Myrtillocactus hidden somewhere at the bottom (don't tell any show judges). Since acquiring that plant I have tried to grow various seedlings on their own roots and all but one has entered the garden waste recycling bin. So although the nursery was rather naughty in not indicating they were selling grafted plants, they probably did you a favour.
Top

I had that from a very well known nursery, no longer trading. Pseudolithos grafted on to a Hoodia which had dried out roots. Hoodias are nigh on impossible to root and it never made it. Should have complained but didn't but never bought anything else from that source.
Top

So - forgive what is probably a somewhat silly question, but is being asked by someone who has no experience of grafting whatsoever - how much of the root stock needs to be "above ground", so to speak? I have planted up this little plant with the compost at the level on the root stock that it has obviously been previously (there's a mark) - could the root stock in fact be buried deeper so as to all but "hide" it? That seems counter intuitive to me, plants need light, but would it work?
Top

I wouldn't bury the stock completely just yet, as it may contribute to photosynthesis, but I have buried rootstocks on larger, older plants with no issues. However, sometimes the stock will throw out offsets, which need to be removed as they sap energy from the scion, so keep an eye out for that happening.
Diane - member of Kingston branch

I agree with Diane with respect to not hiding the stock now when it might still be photosynthetically beneficial to the growth of the scion. Personally though I am always very wary of burying stocks later under compost and suggest using coarse gravel, which hides them well, and dries relatively quickly after watering.
Malcolm
Stockport, UK
Member of Macclesfield & East Cheshire BCSS Branch

Collection mainly of cacti, though interested in a much wider variety of plants than I can accommodate!
Top

Diane and Mal, noted and thank you. Having only just potted it up, I'll leave it as it is for now then, and see how we go...
Top
Post Reply
39 posts