Hi all, these were from the seed list last year down 18th January 2020 and surprisingly they have lived for a whole year!

As I expected them to die like the others the previous year I’m in uncharted territory, does anyone know what I should be doing next?

I think they should be bigger than they are, I also don’t think they’ve had the amount of water or light they needed.

As always, any help is really appreciated 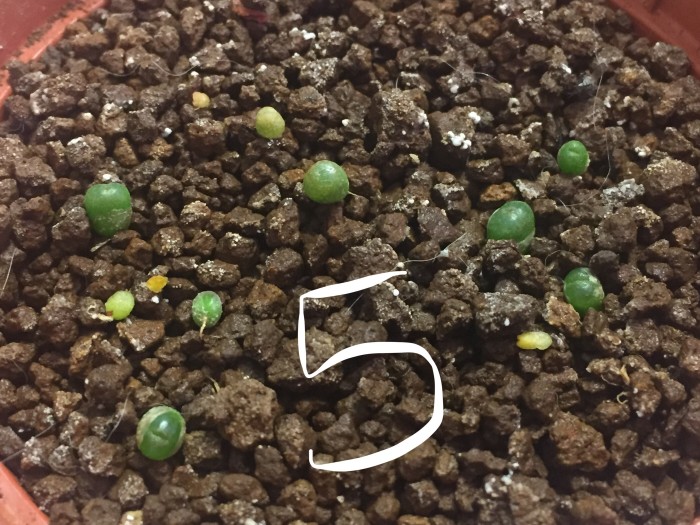 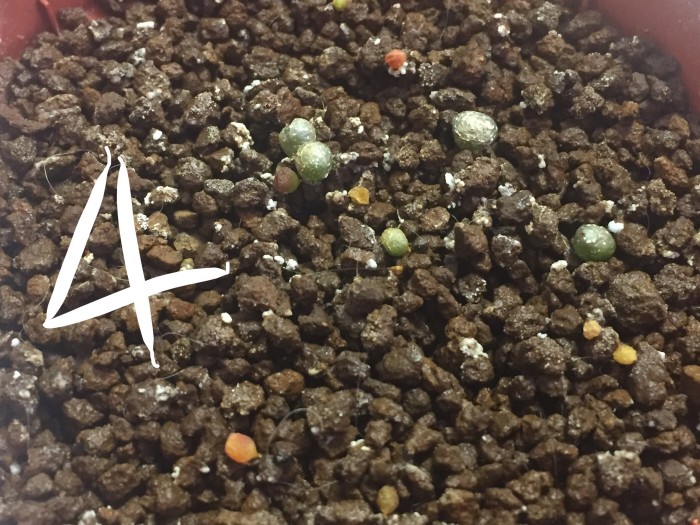 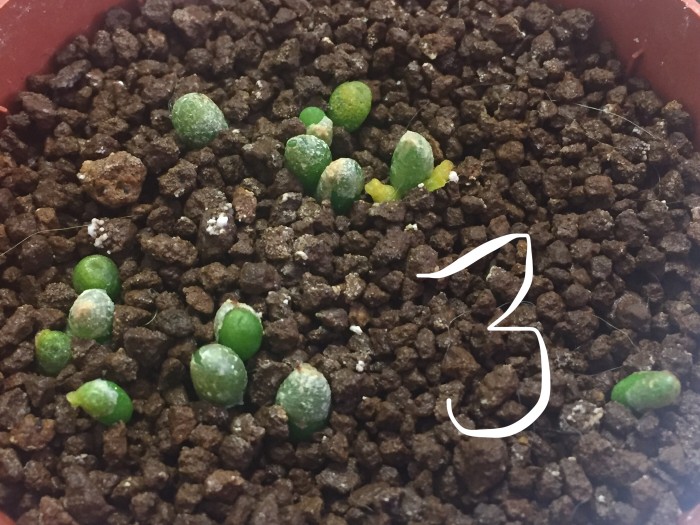 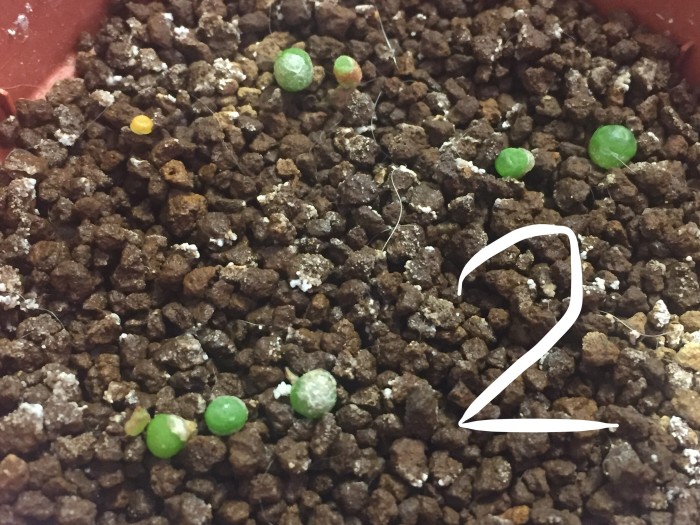 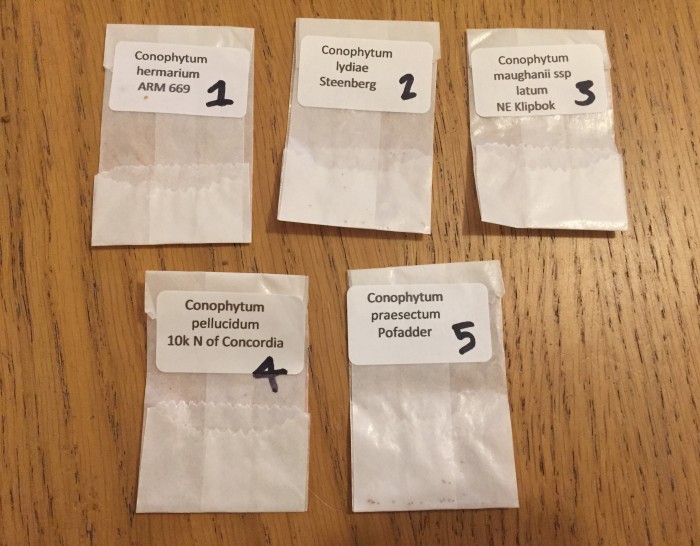 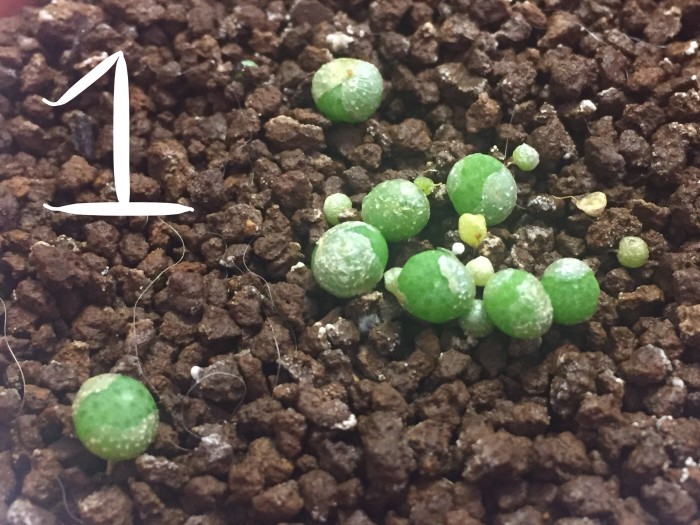 They're not as fully developed as I would expect after a full year but they look ok to me. They don't look stretched so they're probably getting enough light. They are winter growers and I would carry on with an occasional watering regime for another month or two, then withhold water until July/August and keep them out of direct sun from about April. Good luck.
Rod Smith

Here is a 7cm pot of C. burgeri seedlings photographed last autumn at 10 months old, photographed just before being lined out. 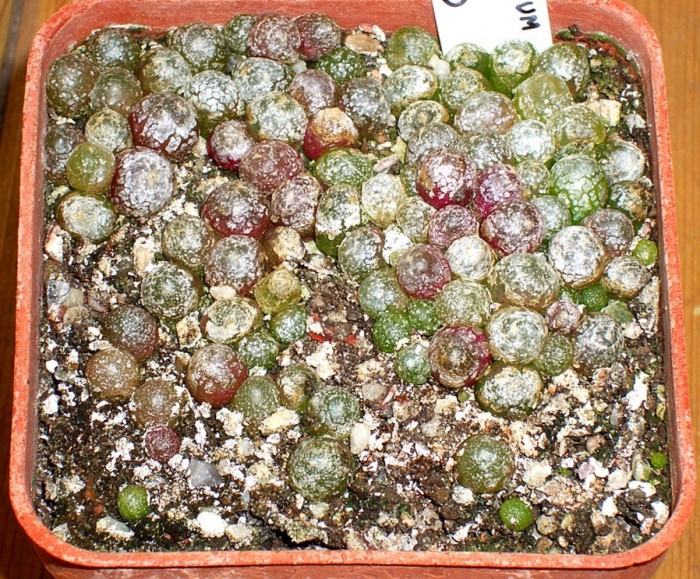 Note a couple of things:

They are in a much finer mixture than you have used, mine are in a 1:1 mix of John Innes seed compost and fine grit. So I wonder if yours have not been getting enough moisture.

They do like company and it is best not to spread out the seeds in a large pot.

They have never seen a plastic bag.

My first year seedlings are watered right through the summer and there is just a short dormancy when the cotyledons dry up and the first true leaves appear. I only allow a full dormancy as suggested by Rod in the second summer.

They had shade from early April onward.

Feeding with dilute Chempak 8 helps them along.

Why don't you like using loam-based composts indoors? The don't create a mess.
Top

How do you keep them moist Terry? Are they standing in a tray with a bit of water, or are you watering (misting?) them regularly from the very beginning? I need to find a better way than the zip lock for small seedlings like Conophytums.
Mat
Top

For the first 6 - 8 weeks they are getting regular misting, augmented every 1-2 weeks by a dunking. Standing on their heating mat, they do dry out relatively quickly.

Heat is turned off sometime in March depending on whether there is a Beast from the East and I tend not to mist after that. Watering above with a fine rose can can be used once a firm crust has formed on top of the seed pots but I still like to give an occasional dunk.

I am using a Two West propagator unit in which the whole front panel is hinged. When first sown, I do not close that panel completely but leave a gap of a couple of cm at the bottom. After two weeks when most pots are showing germination, the front panel is swung up completely to rest on top. When I was a window-sill raiser, I put petri dishes on top of each pot and removed them just as soon as germination was seen in any particular pot.

Incidentally, although I tend to inbreed the purplest C. burgeri, note the variation in body colour of the seedlings in that pot.
Top

Thank you, great advice and after my recent experience with C. burgeri in a zip-lock bag I will try this method now. In the end I have 5 tiny seedlings out of 11 seeds, but I think I managed to kill at least 2-3 by opening the bag too late - did't see them through it early enough.
Mat
Top

They do like company and it is best not to spread out the seeds in a large pot.


That's interesting, Terry. Most of us would only thinking about sowing maybe 10-20 max burgeri seeds that we received. Would you have any advice for planting that number?
Top

I don't like mixing species in the same seed pot so one has to use a 5cm pot and accept that they are a bit more spaced out than you might like.
Top

Thanks, terry. Should we squeeze them into a corner?
Top

Thanks, terry. Should we squeeze them into a corner?

Potentially some similar species (in terms of size, watering needs etc.) could be sown in one pot divided with a plastic label or similar?
Mat
Top
Post Reply
22 posts