Is there a good time to change the soil on a Dioscoria Elephantipes? I want to have a more inorganic mix as I’m worried it might rot

Mine has just started putting out a new stem. 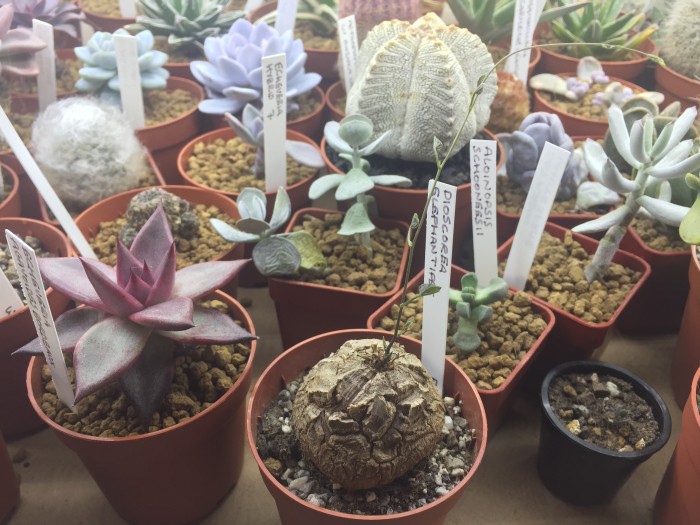 Your plant seems out of kilter. My three always start putting up new vines in the late summer or early autumn. Attached photo was taken August 28th for instance.
If I were re-potting them I would do it during their dormant period which in my case, would be summer. 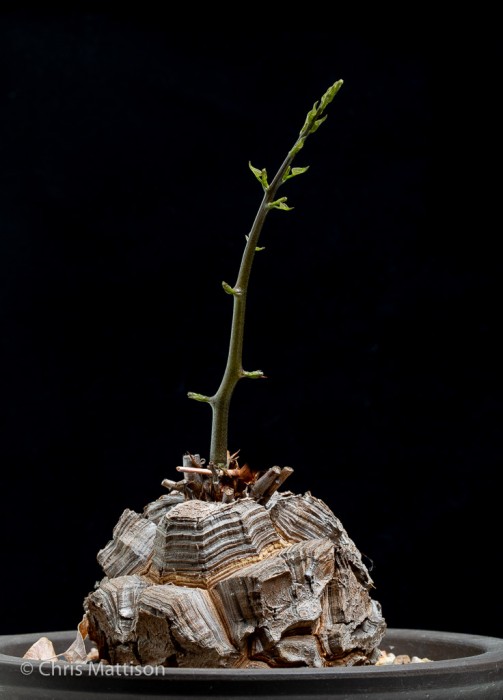 Best to follow the plant and water when in growth. In that small pot it is unlikely to rot . I would repot in the next dormancy.
Top

As long as you don't let water get into the top where the shoot emerges, they are not rot prone.

A rich potting mix is best, so an inorganic potting mix is less good. As Chris says, your plant starting to grow unusually late but I think if you act soon you can repot it. Get a pot double the size of the present one. Carefully slide the plant out without disturbing the root ball and pot it up in the new pot.

If the new shoot is accidentally knocked off while doing it, don't worry, it will grow another after a while.

If in doubt about whether to water it - always water it! It is a yam!

Yours is just adapting to your growing conditions. In the greenhouse the old vine will start to turn yellow and the leaves will drop soon. A new vine starts to grow during the summer. Yours will have a different growing season if grown indoors under lights, nothing wrong with that. Mine was bought about 35 years ago at a nursery in the north where I couldn't find anything to buy and bought it out of the feeling that I couldn't leave with nothing. It's been in the same pot for at least ten years in basic JI and grit, nothing special. They're easy as long as not overwatered when dormant.

Thank you all and thanks for the link Steven, I did have a quick look on here for Dioscoria but didn’t see that thread.

It’s not surprising that it’s out of sync because it has been moved around quite a bit the last couple of years.

I’m not too fussed about getting it bigger as I don’t have much room and if it likes a more organic soil I’ll Leave it as is for now. If I do repot in the future is it worth putting a layer of grit under the base of the caudex and have more organic soil underneath? Also wondered if bottom watering is better for it

Thank you! And good luck with your wooden tortoise! You've had plenty of good advice here. They're not difficult.
Top

I repot my succulents when they are awake & in full growth, its also a pot on not new soil/repot, I think with succulents its better for them as they don't have damaged roots when you are waking them up with a water, it can add an extra stress factor for tempremental plants but thats only my method.

Dioscorea bodies normally lift up once they get their roots growing

A friend of mine who lives on the Isle of Wight has grown this species in an unheated porch on the front of her house for over 20 years. She considers it to be as tough as old boots, although temperatures on the island are usually warmer than on the adjacent hampshire mainland.
I grow all my seed raised plants, young and old, of this species in an unheated hampshire greenhouse, with recorded temperatures down to minus 6, without any damage in over 15 years either to leaves or caudex.
It will happily grow, in my experience, in any free draining loam or peat-based growing compost. I see no reason to attempt to grow this species, or most other succulent plants, in a non-organic growing medium.
David Neville
Secretary of Southampton & District Branch. BCSS member since 1977.
Top

A layer of grit is not necessary under the caudex. It is quite happy sitting in the potting mix.

Bottom watering is not necessary either. Watering around the base is perfectly fine - in fact, each time I water, I just pour rapidly a couple of litres of water straight onto the surface of the potting mix.
Cacti and succulents with data - especially clonotypes, topotypes, old clones, ISI introductions - basically plants with stories!
Top
Post Reply
25 posts