Does anyone else grow Beschorneria?
This has been in an unheated greenhouse all winter, and has decided to flower, which is a first for me. About 1m tall so far. Very pleased! 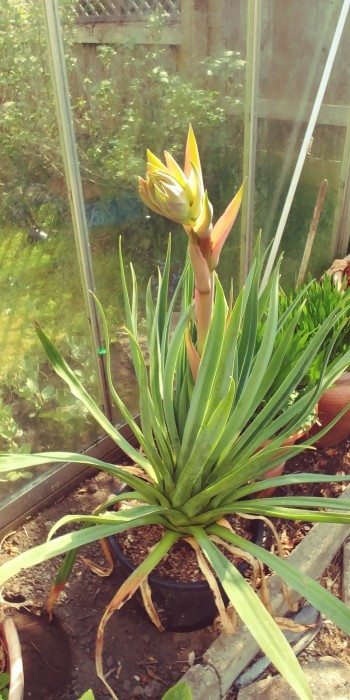 Mike
Based in Wiltshire and growing a mix of cacti and succulents.

Had to look that up. My completely wrong guess was that it was a bromeliad (it's actually in the Agave family). I guess it gets quite big?
Ralph Martin
https://www.rrm.me.uk/Cacti/cacti.html
Members visiting the Llyn Peninsula are welcome to visit my collection.

Swaps and sales at https://www.rrm.me.uk/Cacti/forsale.php

My Field Number Database is at http://www.fieldnos.bcss.org.uk
Top

I don't know how big it gets. I guess this is about the size that rosettes get before flowering!
I'm also assuming the main rosette will die after flowering like Agaves, but there are now some small offshoots forming at the base to keep it going...
Mike
Based in Wiltshire and growing a mix of cacti and succulents.

I'm a massive fan of the genus, I grow all of the species! In fact I wrote them up for The Plant Review (The Plantsman, as it was then) a couple of years back.

In the ground B. yuccoides spikes can reach a whopping 3m with side branches extending 1m each way. Unlikely to get that big in a pot, though. Enjoy the spectacle!

What will happen is indeed that the rosette that flowers will die but offsets will appear from around the base of the plant. These grow on for a few years to form what can be a sizeable clump - then you get multiple flowering spikes! They are pretty hardy, mine were undamaged at -8C and I know they can go lower.

I have 4 species coming into flower this year - yuccoides, septentrionalis, rigida and the single trunking member of the genus albiflora. This will be the first time my albiflora has flowered so I am massively excited about it.

I will most likely cut off the flower spike of the yuccoides and septentrionalis in an attempt to set pure seed on the others - they can and do hybridise very easily otherwise. Luckily there is some distance between the rigida and albiflora.
www.oasisdesigns.co.uk

I'm assuming mine is B. yuccoides. It came unabelled. Are the others as easy to grow?

Mike
Based in Wiltshire and growing a mix of cacti and succulents.

Interesting plant and flower. New to me.
Top

Hi Mike,
We grew yuccoides when we lived in Brighton. We had planted it outiside on a very well drained south facing slope and got it to flower but unfortunately it didn't survive one of our more severe winters and since moving inland have not tried it again.
Suzanne
Top

I'm assuming mine is B. yuccoides. It came unabelled. Are the others as easy to grow?

Yes, yuccoides. Yours actually looks like an 'odd' form that has slightly incurving leaves - if so the inflorescence won't be so branched.

The others seem to be easy. I grow all mine planted out in the garden.

B. septentrionalis should, in theory, be the hardiest as it comes from further north than the others - also found in shade, too. Yet some people have found it to be a bit picky - I've never had trouble with it. B. albiflora is in a bed that gets a cover - I believe this is the most tender species although mine took -5C under cover with no issues - it is certainly the least understood. Unlike the others it makes a new growth point on the same stem after flowering and forms a trunk. I saw a big old specimen in a botanical garden in the Azores that was 3m tall.

The others take what comes. B. tubiflora was badly damaged winter 09/10 but came back. I haven't had calcicola or rigida as long as the others but they came through the Beast From The East OK.

The only other species is wrightii and I have tried this a couple of times with no luck. I have recently acquired some other artificial hybrids that I am going to plant out this year.

Suzanne, this surprises me as I have heard of people growing this up in Yorkshire against a sunny wall.

If I get time later I'll add some pictures to this thread of the various species.
www.oasisdesigns.co.uk

I think I can link to the pdf of the article I wrote. Let's see if this works!

Many thanks for all the info and the link Paul. I suspect now I'll have to starting searching for other B. species!
Mike
Based in Wiltshire and growing a mix of cacti and succulents.