I'm a relative newcomer, becoming increasingly puzzled in identifying some of my cacti, and I guess I may not be alone!
I have Baedeker's Cactus Lexicon, and David Hunt's New Cactus Lexicon Illustrations only ie not full edition.
The latter is usually my first port of call, laboriously but pleasurably going through the pictures until I spot something resembling my specimen, and then I search in my Baedker's to obtain a detailed description.
This is where the problems can come in, as many changes have been made since that was published and something appearing in Hunt's is often not under that name in Baedeker's.

This is where the internet comes into play, and I've found Daiv Freeman's cactiguide to be a good source, as it gives synonyms which often enable references to be found in Baedeker's and so assist in id.
cactus-art.biz is another one, which has some association with the seemingly defunct Llifle which I'd previously found very useful.

My latest quest was to identify what was identified simply as Ferocactus, bought back in 2014 and has just come into flower. I soon established that it was of the genus Stenocactus, but could find nothing like it in Hunt's except S obvallatus, although spination was much different from mine (see attached). This genus of course is not recognised in Baedeker's, but Daiv's website gave synonyms which did appear therein, and which ultimately led me to conclude that it was most similar to what is now known as S. hastatus, but Daiv felt S.multicostatus was more likely, it being more commonly available.

As Hunt's only mentions about 7 or 8 species of Stenocactus, but neither of the above and none of the synonyms, I am left wondering how one is meant to identify it using Hunt's? I suspect the other volume may well assist in this, but of course it is no longer available, new or used (unless anyone knows different?)

I would also be grateful to hear of other sources of identification others use.

Sorry for the long post and thanks if you've got this far! 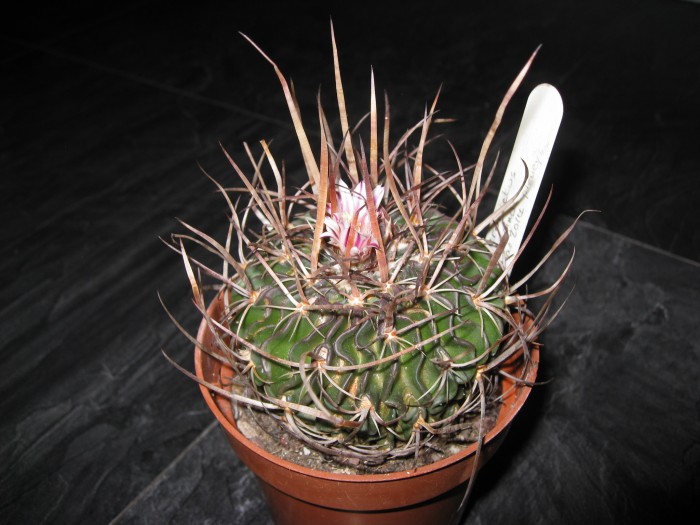 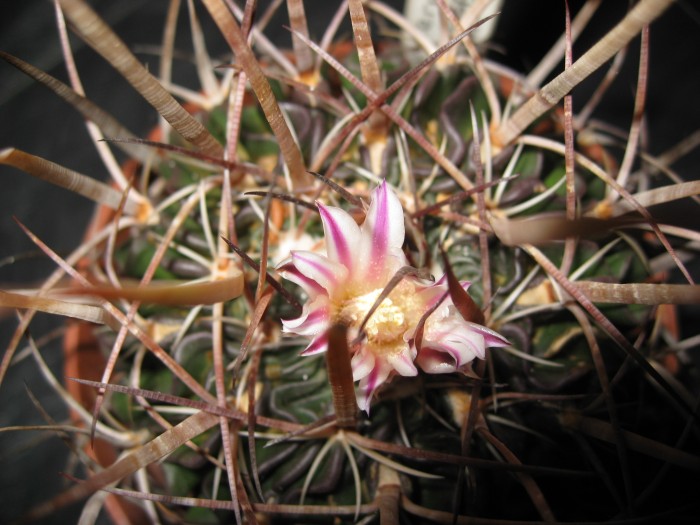 S. multicostatus has a lot more ribs than that, believe it or not. S. hastatus has quite large flowers, larger than yours appear to be, and tends to quite long spines. Your plant looks like it maybe fairly young? So spination might not be fully formed yet. In modern nomenclature, many of the forms common in cultivation are lumped to S. crispatus.
Cheshire, UK
Top

Thanks for that. At least it appears to definitely not be S multicostatus.

As stated, the plant has been in my possession for 7 years, and has changed little in size over that time.
The description in Baedeker's under Echinofossulocactus hastatus to my mind matches my specimen closer than does that of E crispatus, and on spination alone mine is nothing like the picture of S crispatus shown in Hunt's.

Even accepting variation within a species, I find it difficult to reconcile my specimen with S crispatus.

So that has increased my difficulty in id even more!

I need more information on the rationale behind the 'clumping' of which you speak. If it's based on 'micro-botanical' work, what chance has an amateur like myself of finding the 'true' id??!!
Top

I'm at the other end of the scale, joined in 1975 and bought Backeberg's Lexicon which was newly published in English at that time. It wasn't much use and I've not bought Hunt's Lexicon because I don't need another list of names and somebody else's photos. On the other hand I have almost all of John Pilbeam's books which are full of useful information and written in an easy-to-read style. I never met Hunt and I don't think he went to branch meetings.
I don't think there's a quick way to cactus/succulent recognition, it comes with time after a lifetime of going around shows, branch meetings, nurseries, plant habitats and actually growing the plants. Whilst I can recognise most plants, I'm hopeless at recognising people. This doesn't really help with the original post, trying to recognise plants from photos can easily give incorrect answers and it doesn't help when the names change on a regular basis. Just to add to the name change confusion, it's only one person's opinion and there's no obligation to accept it. The latest is to rename some Mammillarias as Cochemieas so now we can have Mammillaria Saboae and Cochemiea Saboae, both the same plant and both names correctly described so either name can be correct to use but it doesn't help those just starting in the hobby. We don't all have to change our labels just because someone has a new opinion on plant names. I could have saved writing all the above by just saying, go to branch meetings, nurseries and shows and the recognition part of the hobby will just come in time.

Getting back to Stenocactus, there's lots of names around for just a few different species. I've not seen any two in Mexico that look alike, the number of ribs varies, the flower colour varies and the spine length varies and, apart from maybe three distinct species, the rest could easily all be called Stenocactus Hastatus. On the other hand they could just be seen as small flowered Ferocacti, it's just a matter of time before some botanist somewhere renames them all as Leuchtenbergias. The only think holding them back is that the oldest described genus has precedence so Leuchtenbergia couldn't be renamed as a long-tubercled Ferocactus which is basically what it is, but all Ferocacti could be reclassified as Leuchtenbergias. It's just a matter of time!

I don't have many Stenocactus in my greenhouse amongst the many Cochemiea, but I would call most of them Stenocactus sp. except those ones still, after all these years, with beautiful labels written by Jane (the best label writer ever) Riley.

Thanks a lot Tony, now she wants a pay rise!

I don't think anybody has ever proposed that Mammillaria saboae is a Cochemiea, Stuart? That would be news to me.

As for Stenocactus, there are a few species easy to identify and then a number of species that are not. The latter may all be 1-10 different species depending on who you ask.

Some authors favor splitting into smaller/more limited species concepts (splitters), while the opposite side (lumpers) favour broader species concepts allowing for much greater internal variety in a given species. Backeberg is perhaps the most famous splitter, while Hunt is perhaps the most famous lumper. That is reflected in how many species and genera they recognise.

I think Bravo-Hollis recognised over 20 species, and she (rather than Hunt) is still considered the main authority by Mexican researchers. Stenocactus is in dire need of serious genetic work and new field studies to make sense of the genus. It's too easy in my opinion to just lump different populations together in one species and call it a day.

Personally I think I would call your plant S. obvallatus, but it could go by many names. Without knowing anything about its provenance you might be best off just calling it Stenocactus sp.

Edit: I just had a look at Bravo-Hollis' key to Stenocactus and according to that, your plant is not obvallatus as it is missing a central spine. I'd go with Ian's suggestion of S. crispatus.
http://www.cactusglobe.com
Top

The thread on Mamm Haudeana a few days ago showed a whole mass of Mamms that had (in one person's opinion) been transferred to Cochemieas. I'd suggest we ignore it and it'll go away. Don't change labels.

Thanks for bringing that paper to my attention, Stuart. Will see if I can get hold of it. Not discounting their findings, but I won't be changing my Mamm labels anytime soon.
http://www.cactusglobe.com
Top
Post Reply
14 posts