Euphorbia piscidermis is a lovely species, not too difficult to find in the trade but unfortunately it is often available as grafted plants only, which for me detracts from its beauty.

I once bought a specimen on its own roots from Phil White when I was visiting England in 2002, and took it back to Brazil. The little plant did not have many roots, and the roots did not seem very strong to me. The plant was potted in my normal compost when I got home, but after a good while it was not showing any signs of new growth.

I searched the literature and found the information that this species grows in limestone gravel in a reddish, limestone derived soil in its native habitat. A similar kind of limestone soil occurs in several areas in Bahia, Brazil, and the next time I visited the region of Morro do Chap?u I collected a little bit of this kind of soil and limestone gravel, and repoted my Euphorbia piscidermis in this stuff.

The plant did not show any signs that it was enjoying the new substrate at first, it was not growing and just sit in there. But after a few months new growth became apparent in the little plant, and it even flowered.

Unfortunatelly when I had to move to Switzerland to do my PhD. I had to give away my Euphorbia piscidermis. I unpoted the plant, and to my surprise it had developed a very strong root system, the root ball completely filling the pot where it was potted. There were three or four main roots, very thick and strong, growing all the way to the bottom of the pot and curling there.

So I presume this species really likes the limestone-derived soil in which it was potted in!

If I do not find plants in its own roots, I will try to degraft grafted specimens.

Is this species difficult to root if degrafted?

I don't remember seeing any on their own roots & only know one person that has degrafted his successfully, he used nail varnish to seal the cut & then placed in gel 2 root to get the roots started.

I have tried twice & they are bad for rotting quickly, I did manage to graft 2 plants & last yr tried to degraft but lost the top, they are also very tough to cut & even using new scalpel blades it's a bit dangerous.

Larry- they live up to their name.

However some good came of the topping ( next photo)
[attachment 7719 e_piscidermis2.jpg]

I kept the stump & it has 7 pups forming but they are slow. It was last summer that I chopped the top so it be a while before I can try growing them on their own roots.

Marlon I have sent you a PM
[attachment 7720 e_piscidermis.jpg] 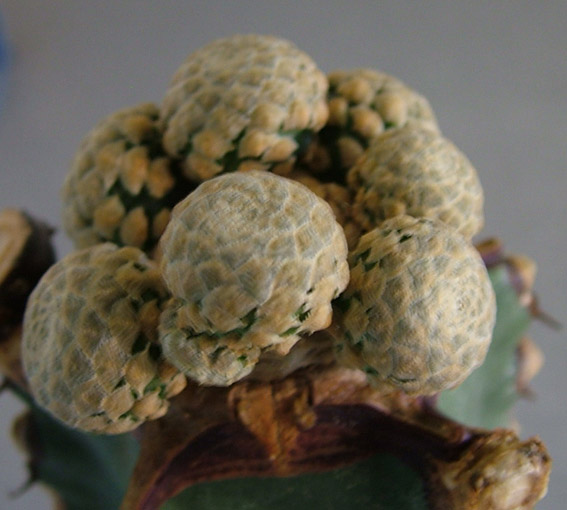 Not very encouraging to know that they are that difficult to root, but I think I will do like you did and behead one grafted specimen, wait for its pups to be large enough, and try to root them sealing the cut surfaces with nail varnish. What is "gel 2 root"? Some sort of gel with rooting hormones in it?

I intend to next spring so any advice would be very welcome!

Sorry, no advice on this - I must admit I could only cultivate Uebelmannia if grafted, I just could not keep plants in their own roots - I believe the reason for my failure was that I was not providing the plants with the right substrate, Uebelmannia grow in very acidic soils, and I believe in cultivation they will grow best in an ericaceus type of soil with a good amount of gravel in order to improve drainage. All the plants I had before I came to Switzerland - which I grew from seed I collected in habitat - were grafted in low rootstocks which later were buried in the soil. A very good rootstock for me was seedlings of Pilosocereus gounellei, because this is a vigorous and undemanding species and when young the seedlings are very fat, providing a good surface for grafting, and not very tall - the only problem are the spines.

Discocactus is a different story. I cultivated Discocactus zehntneri and Discocactus bahiensis, and for me they are very easy to grow in their own roots. But maybe the reason why I found these species more amenable to grow in their own roots is because they do not grow in very acidic soils in habitat. Perhaps species that grow in more acidic soils - D. placentiformis, D. horstii, D. pseudoinsignis, etc. - are more difficult, but I do not have experience with these.

You must remember that I grew these plants in Brazil - I do not have experience in growing them under European conditions.

Marlon I have sent you a PM
[attachment 7720 e_piscidermis.jpg]

Hi Tina, I am wondering if you have managed to keep them alive 14 years later, and if you have successfully degrafted them. Also, I'd like to ask, why were you trying to do that? (If you can remember

Hi,
Yes here is my little baby, Jan 2014 it had a rootlet just a few mm long but its still alive and makes a little growth, not exciting to look at unless you know how difficult it is to grow in the UK on it's own roots.
I did take marlon's advice and picked up some really nice dark sandy red soil from Cyprus when on holiday.

Its the challenge, you have to try these things, grafted plants are useful for seed & future stock for experimenting with I like to try them on their own roots if possible.
This is in a 23/4 " pot 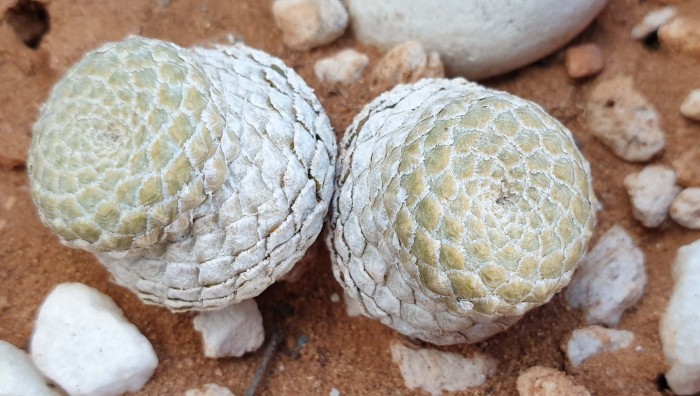 I do have another grafted plant I damaged but the offsets are still a bit small as it takes such a long time to root they need to be able to survive for a few years rootless. 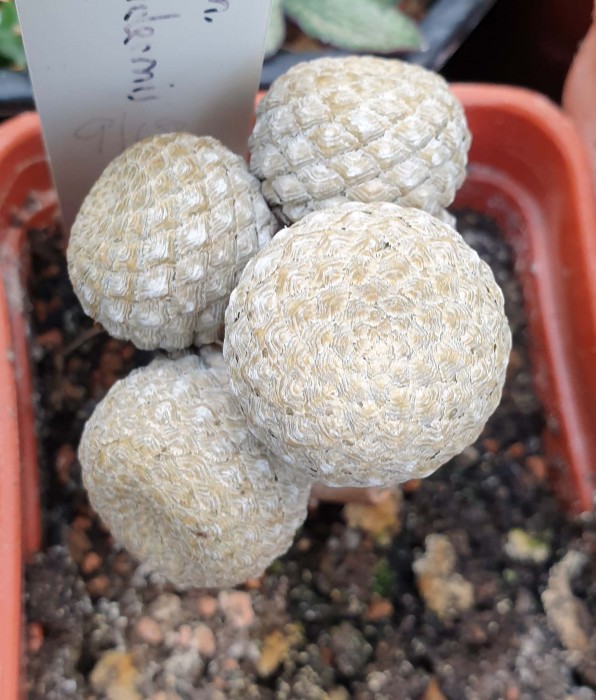 It is a fascinating plant and I would love to grow some, along with euphorbia gymnocalycioides. Shame they are so rare and even harder to find. Your ones look great and very happy.
Top
Post Reply
10 posts • Page 1 of 1