A few hours on a Bushmanland hill.....

A few hours on a Bushmanland hill.....

.....so not really a travelogue as such, but that sort of thing and as there are a few more photos than usual I thought it better here than in the general forum.

I've visited this beautiful part of South Africa multiple times as there is so much to see. The first photo is a view looking east across Bushmanland to illustrate some of the many "inselbergs" which seems to erupt from the surrounding veld.....which I assume they did millennia ago. The area can benefit from winter and summer rains which may account for how good some of the hills are for diversity of succulents. During the past 20 years or so I've looked over more than 20 of these hills (a few 2 or 3 times) and some have been good, some poor and some amazing. Geology especially here is critical to how rich a hill is, as although the majority are quartzitic, we've discovered that as far as succulents are concerned there is good and bad quartz. I only wish we could tell the difference when looking at Google Earth, but unfortunately they all look the same from that high up! It's only on the ground can one see that on a poor hill the quartz is subtlety duller and greyer so all that grows there is grass and a few unfussy succulents like the ubiquitous Conophytum lydiae......but find a hill with good quartz and a treat is invariably in store. The subject of this topic, Groot-Nooisabisberg, turned out to be in that category. It's an odd sounding name but nois or noois is a Nama word for which I can as yet find no translation. 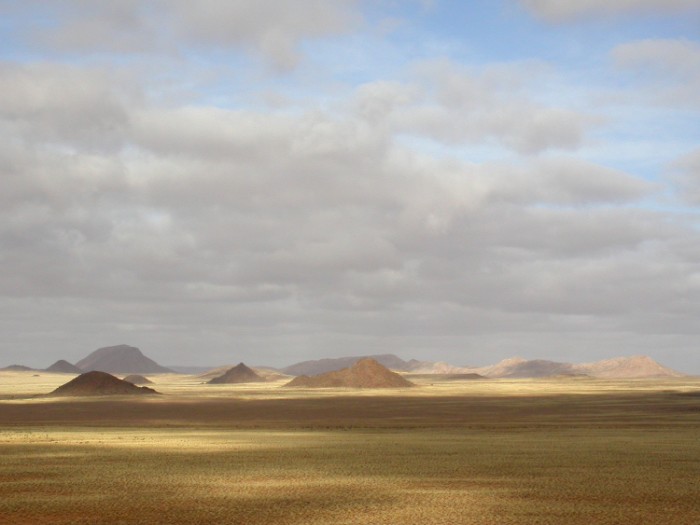 In my recent Crassula thread viewtopic.php?f=1&t=164330 I mentioned recently seeing Crassula mesembryanthemopsis. Being one of my all time favourite succulents it's always a thrill. The small population was on top of the hill in a sort or fine quartz grit but laying over granite or gneiss, which is quite unusal. 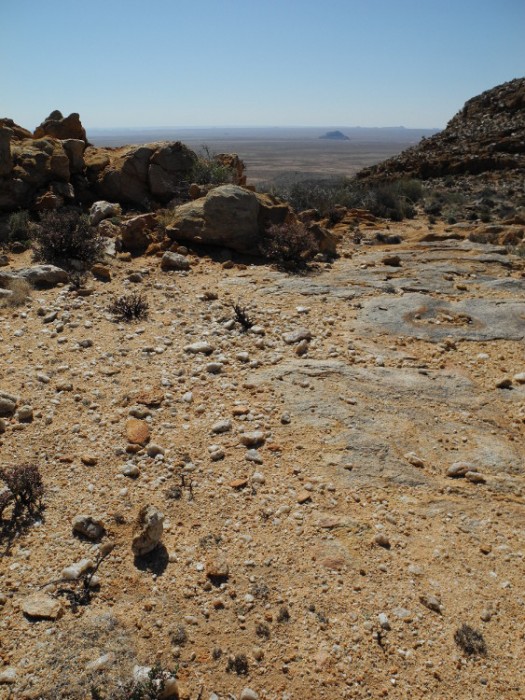 They were all small plants mostly just covered by or peeking out from under the grit, with no large clusters to be seen. 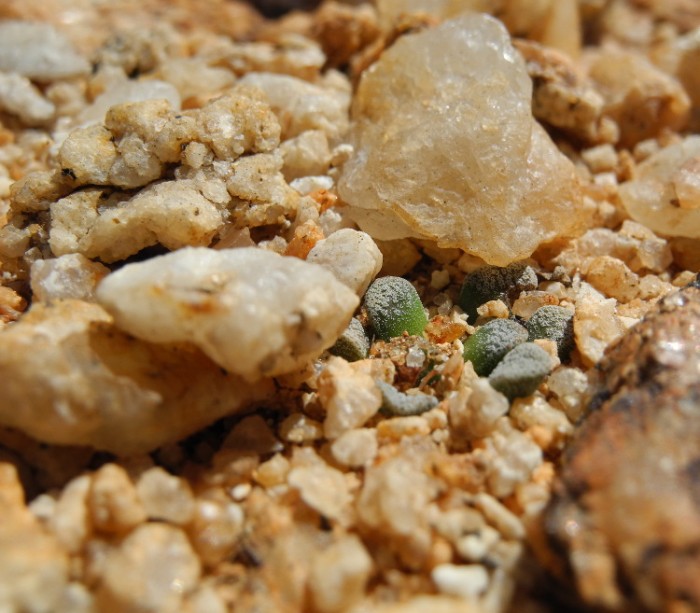 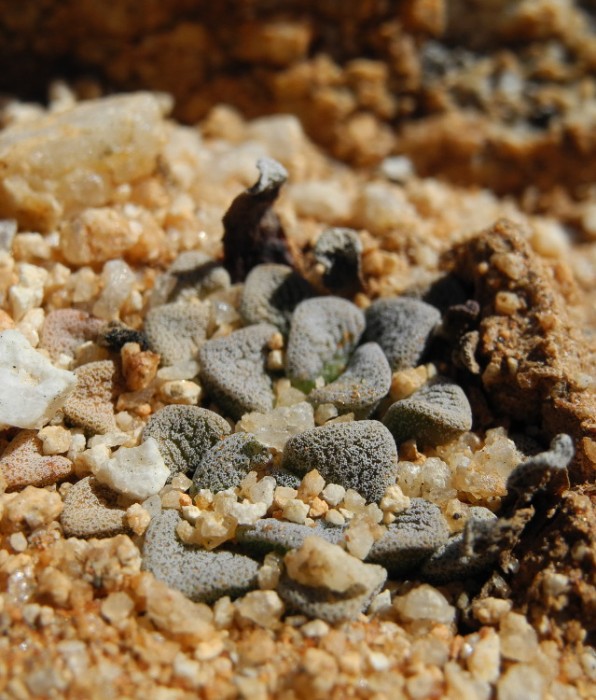 Blow away the grit to expose the leaves. Then carefully sprinkle it back, of course..... 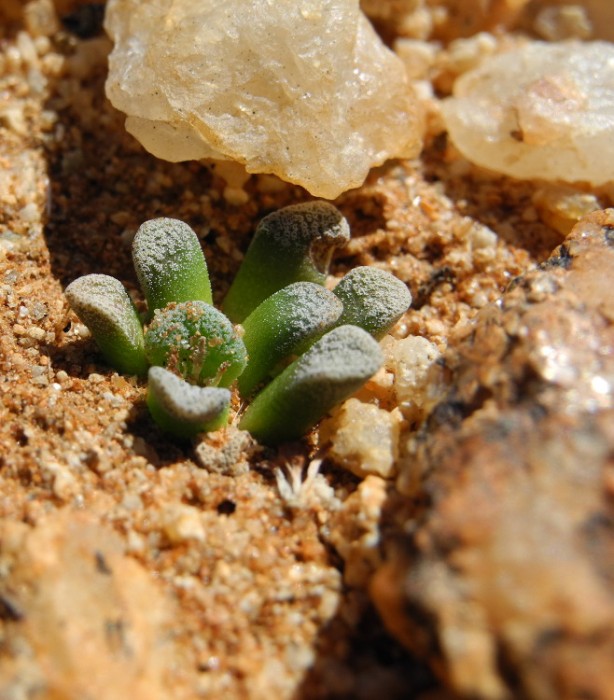 Growing with them was Conophytum lydiae. As I mentioned above, this is on every hill in the area, even those formed from the greyer or duller quartz with no other succulents. 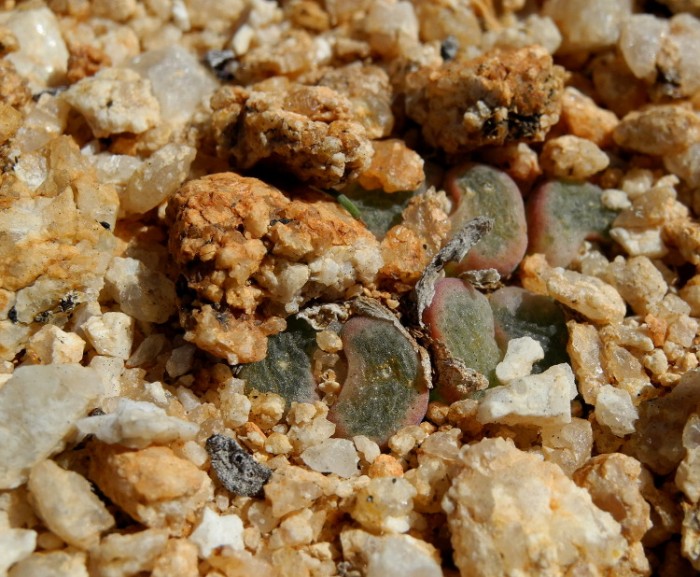 Just over the flat top of the hill to the south side, we came across this gorgeous bulb. Being an admirer but no expert, I asked Terry Smale what they are...... quote, "It’s an Ornithogalum (or are they all Albuca now) but I couldn’t go further than that; they are certainly very beautiful". 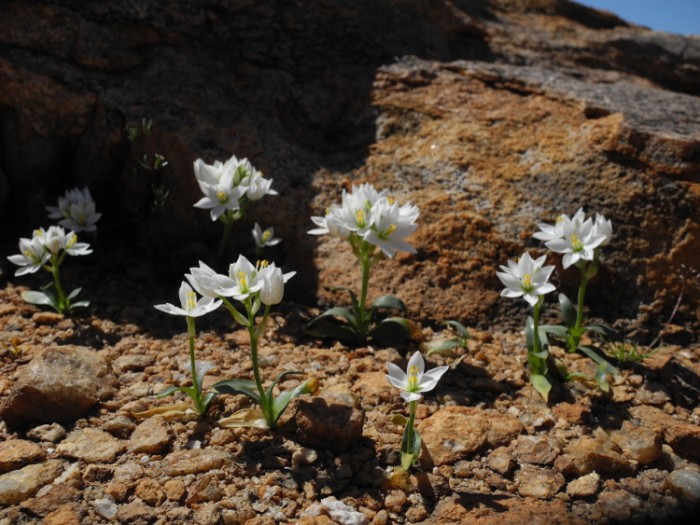 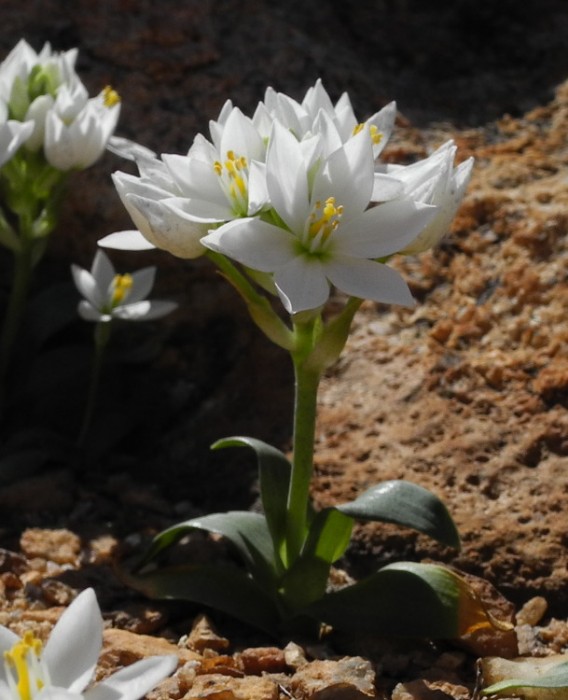 A little further on and I noticed these Adromischus in a shady fissure. What's really interesting here (to me anyway) is that there are two species from two different sections in the genus, growing together. I've seen it before in Bushmanland, with Adromischus diabolicus (S3) and Adromischus schuldtianus (S2).....and here we have the latter (below) growing with Adromischus marianiae 'hallii' (S5 above). 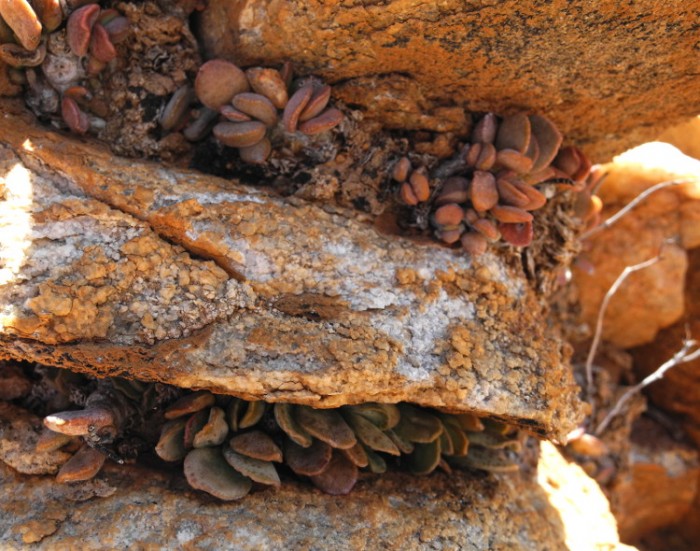 There were quite a lot of them, together and apart. This is A.schuldtianus. 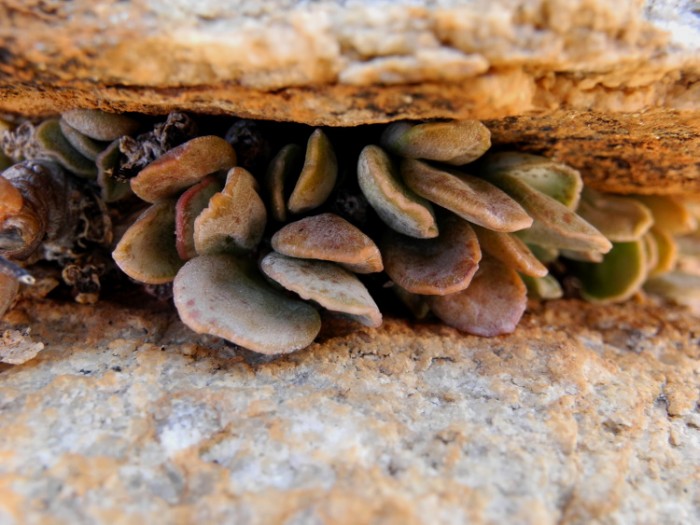 And this is A.marianiae 'hallii', one of the choice and sought after species for cultivation. 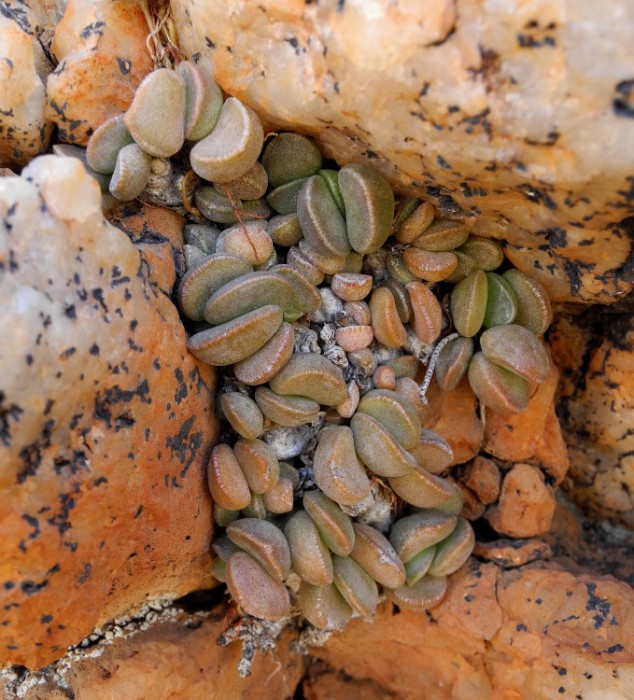 Then.....further along this shady ridge......surprise, surprise - a third Adromischus species and another section (S3), A.nanus. Here growing with Crassula cooperi. 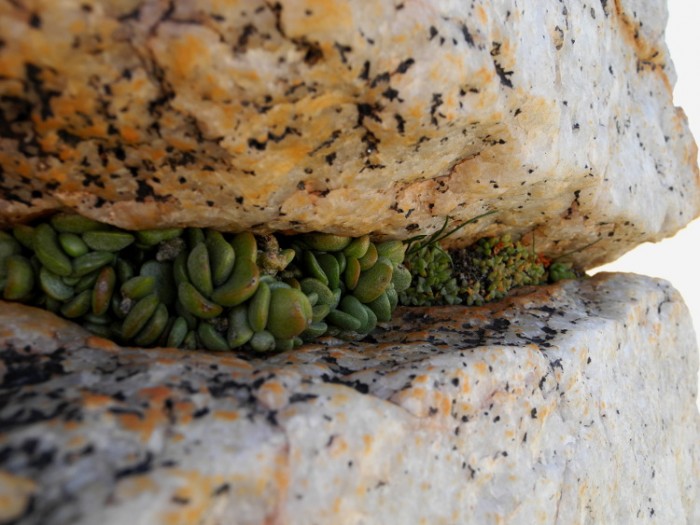 Looking really turgid and healthy, there are tiny bulbs in there with them. 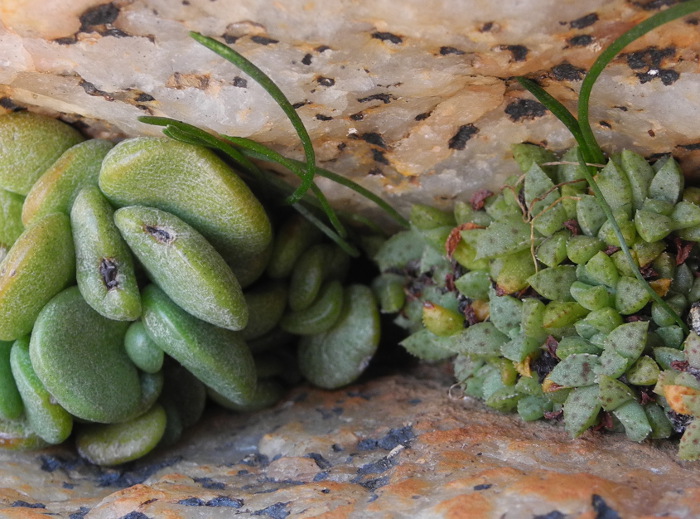 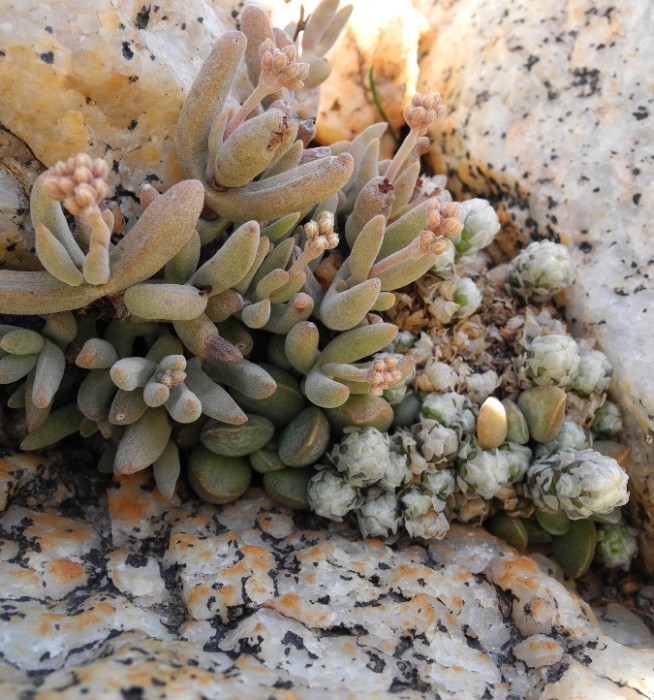 Then at the south east end of the ridge we came upon Conophytum marginatum ssp. haramoepense, common across this region. This is really hugging the rock with a view! But how on earth does a seed get lodged, germinate and grow there, almost upside down?! 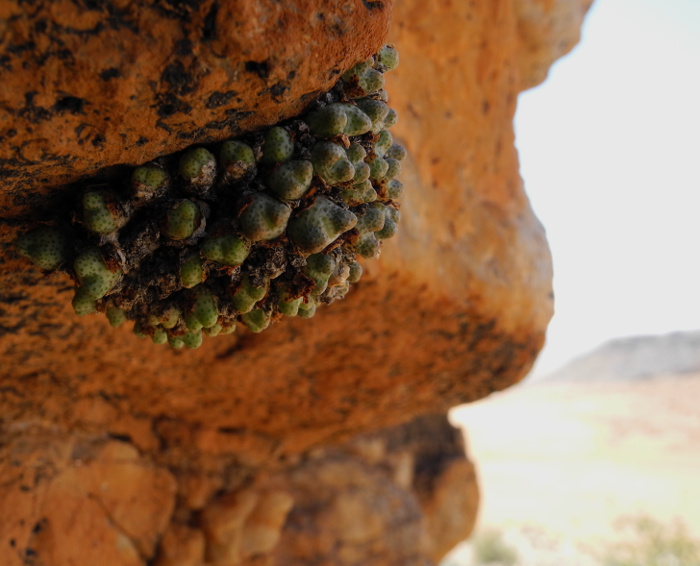 There were many large clusters in vertical cracks, here with a solitary Crassula sericea. 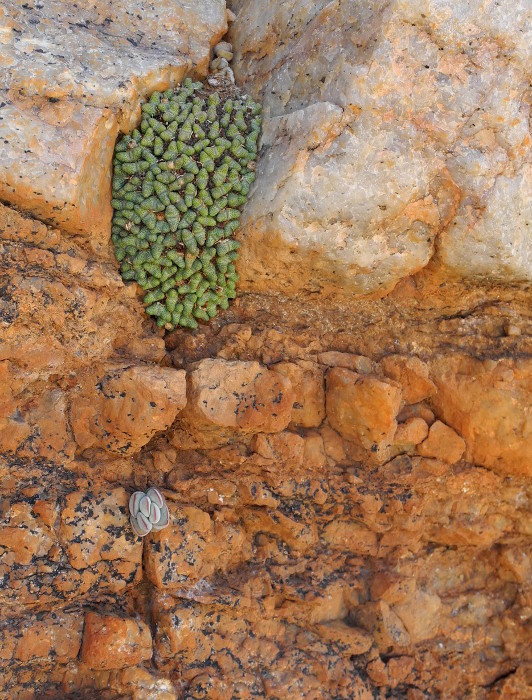 Gaping lobes with wider tips like this are transitional with Conophytum marginatum ssp. littlewoodii which occurs further east. 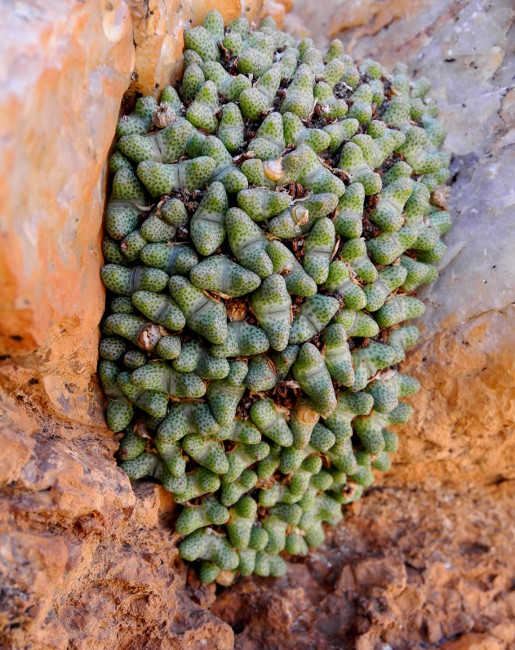 And finally, on quartz flats before getting back to the vehicles were Lithops marmorata and Avonia papyracea ssp. namaensis. 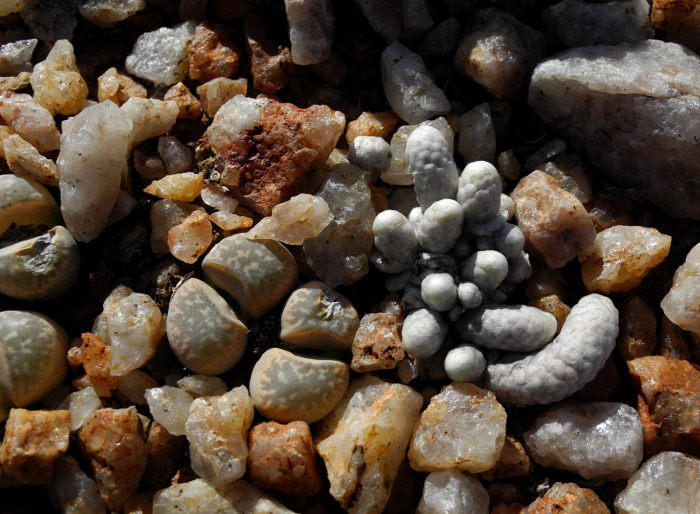 Hard to believe, but all these were seen in less then 3 hours. We only explored a tiny part of the hill, so one day we will definitely return to look further. Every aspect has something different so the western end of the hill might hold different treasures. Can't wait!
Chris Rodgerson- Sheffield UK

Its not easy to do an interesting travelogue these days, everyone seems to have been everywhere and there's lots of 'this is ...' close up plant mugshots these days.
This shows how it should be done, great photos and you 'get the feel' for the place.
Stuart
Top

Such wonderful photos, Chris! Amazing diversity in an incredible area, thanks for sharing!
Diane - member of Kingston branch

Thanks Chris, I really enjoyed these pictures and, as Stuart says, you have captured the feel of the place. You did well even to find the mesembryanthemopsis, and the bulb is really beautiful.
Croydon Branch member, growing mainly cacti and Echeverias
Top

An amazing locality, Chris, and stunning photographs and commentary. Thank you!

Thanks for all the feedback. Makes it worth doing when one knows it's appreciated.

Thanks Chris for sharing

Rather than C. exilis subsp. cooperi, that would be the closely related subsp. sedifolia in Bushmanland.

Just after with Anacampseros (Avonia) recurvata, that's C. garibina, nice and white in cult, but the stems are weak and flop over.

Thanks Derek......I was hoping my lack of name for the grey Crassula would bring a response. See you Saturday.
Chris Rodgerson- Sheffield UK