A quartz hill west of Steinkopf.

A quartz hill west of Steinkopf.

Andy Young & I took a hike up this hill in September 2014. It took about an an hour to reach the top of the highest peak in the photo. On the way across the flats we noticed this choice Adromischus marianiae 'herrei', mostly in and under the bushes, but I found this one out in the open to photograph. It's actually more like the form known as A. marianiae 'multicolor'. 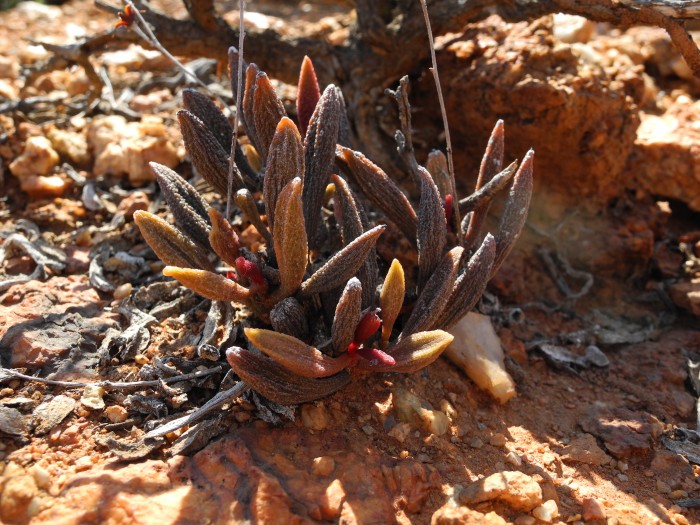 Our reason for choosing to explore this particular hill was because it's the type locality (and so far the only known locality) for Conophytum chrisocruxum. As soon as we reached the blocky quarzt near the top, we started to see the plants. 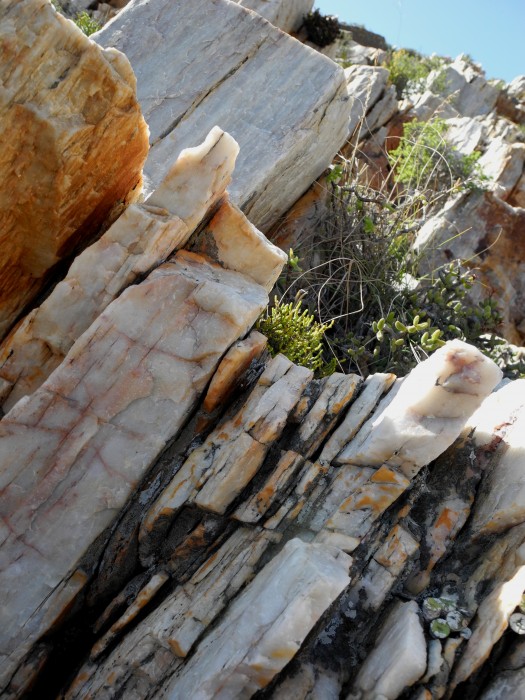 I was actually very near here back in 1996 when Derek Tribble & I met Steven Hammer & Chris Barnhill just a few hours after they'd been up here and discovered the then new cono. Steve was very excited about it but didn't want to tell us exactly where it was until it had been described.....which he did soon after in the American journal, along with Conophytum chrisolum which I took him to see on the same day. C.chrisocruxum was named for the perpendicular cross over the fissure....but actually very few clones exhibit this to any great extent. 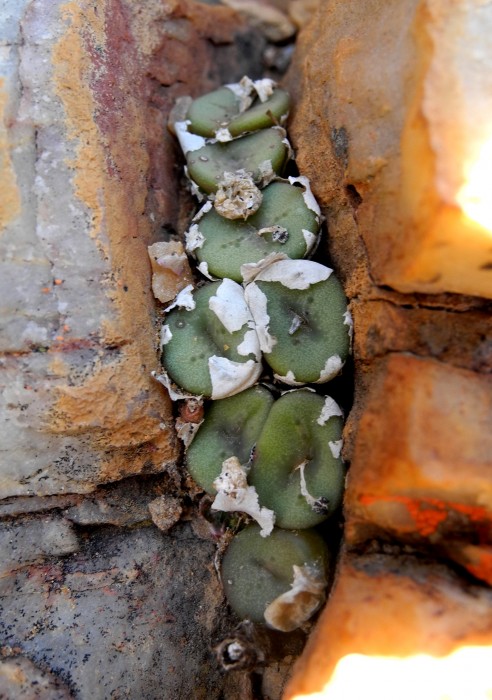 Once up there the peak turned out to be an almost continuous ridge, so possibly the cono extends further than we saw it. 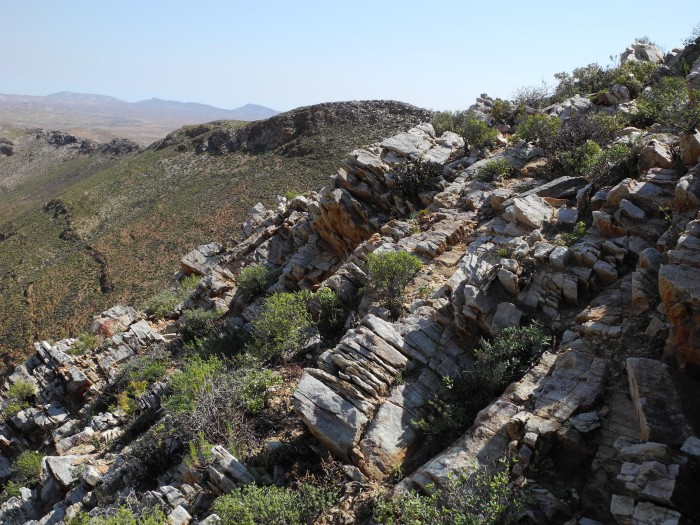 There were many more interesting succulents up there on the south facing side of the ridge I chose to explore. This looks like an Orbea sp. maybe? 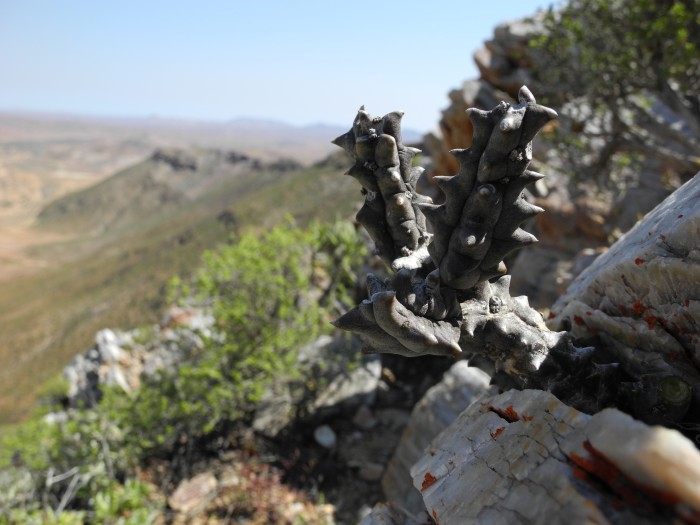 Haworthia arachnoidea is quite common in these parts, only that and H. venosa ssp.tessellata inhabit this part of the country. 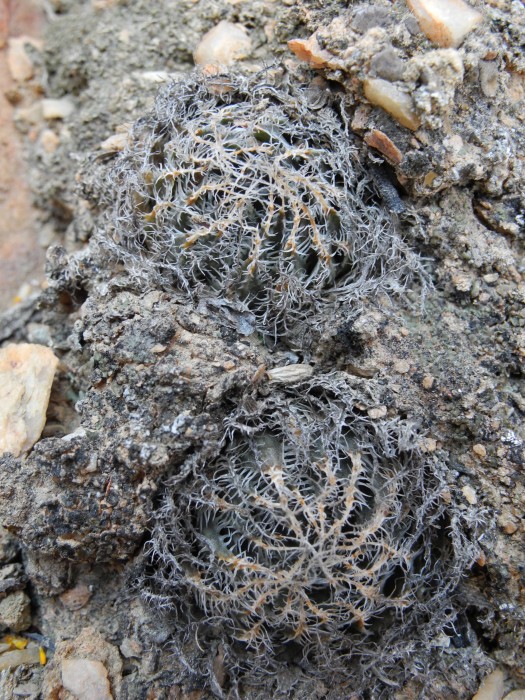 Here it's keeping company with Senecio sulcicalyx and another cono, Conophytum meyeri which is common around here. 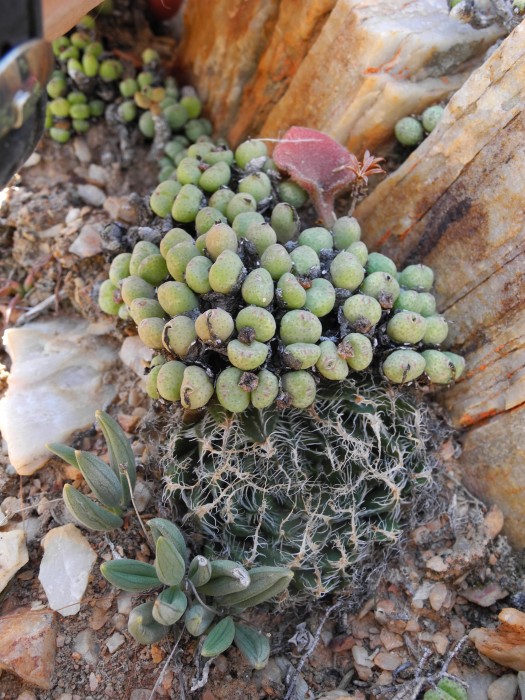 If you look at the above photo closely, you can see a red leaf and a dry Tylecodon flower. I had no idea of the species but on my return Derek informed me that this is also the type locality for Tylecodon cordiformis. 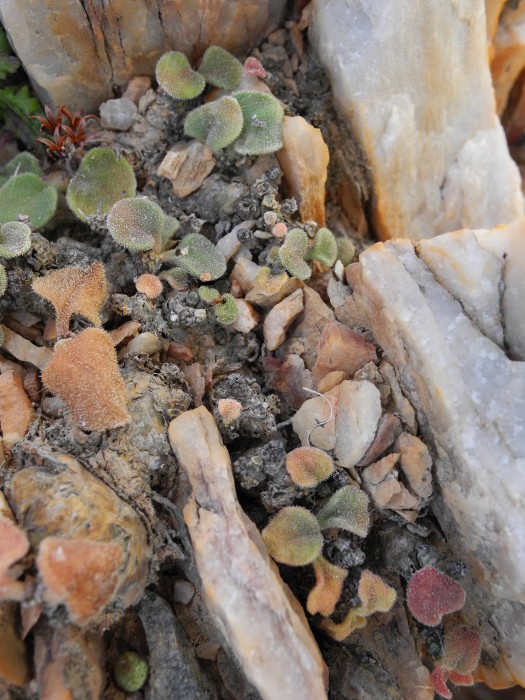 There's another Tylecodon here too.....from memory, a form of T.bucholzianus - but I know Derek will correct this if wrong. Crassula pseudohemisphaericus is also common, always in shade or semi-shade. 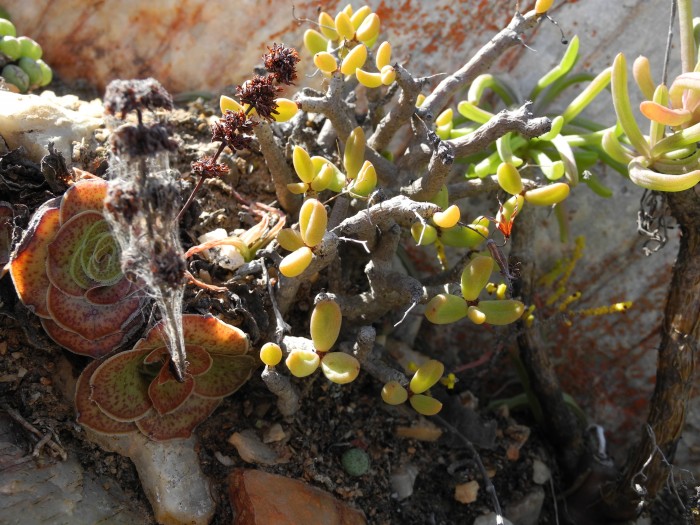 A small form of Adromischus filicaulis. 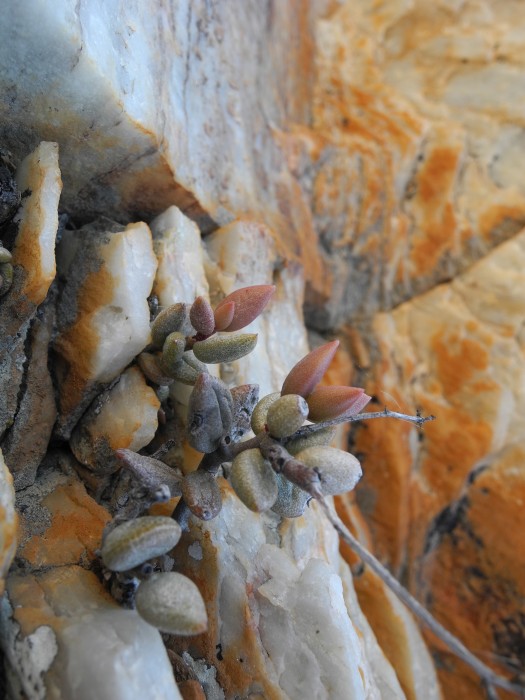 A veritable succulent garden......Crassula muscosa joining some of the plants already seen. 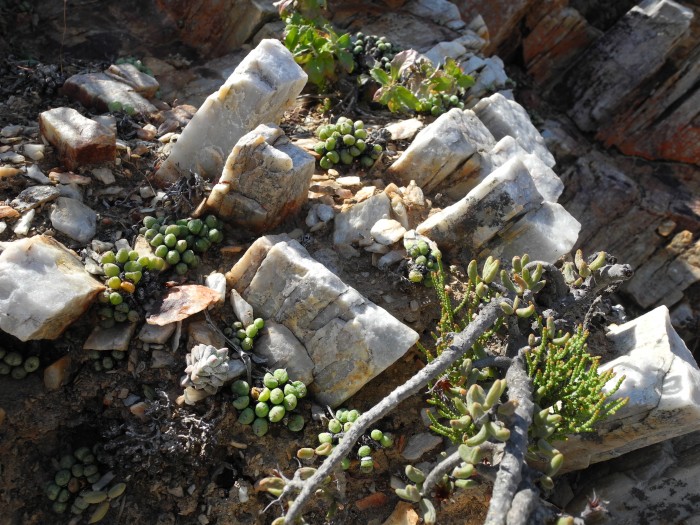 Here's a seedling C.chrisocruxum, with a small Crassula tomentosa and Bulbine mesembryanthemoides. One invariably sees many different Crassulas growing together on such a hill. 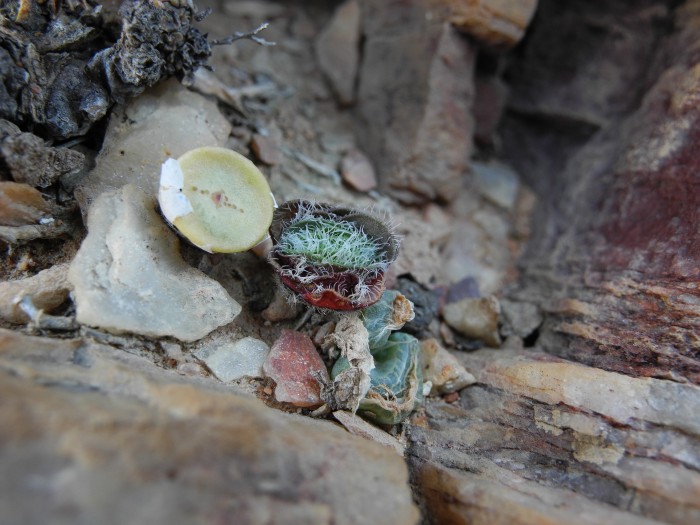 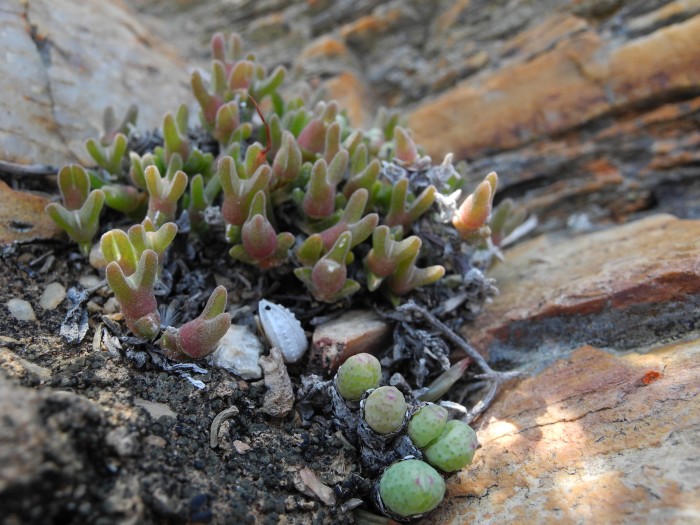 And some really colourful lichen! 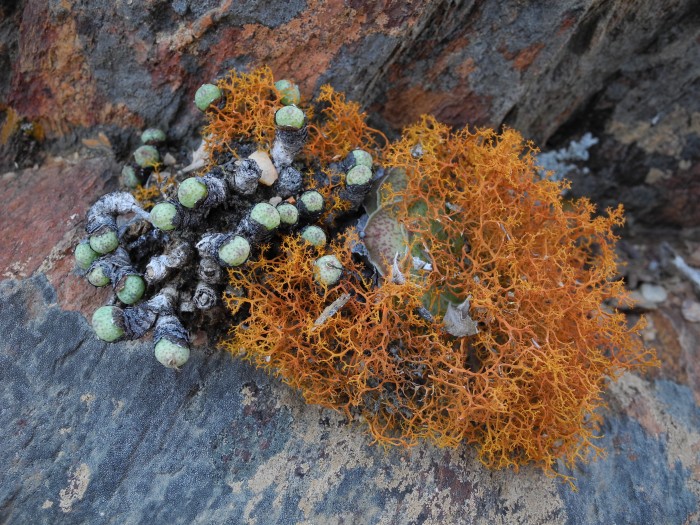 Finally, view from the top of this very species rich hill. And I probably missed a few! 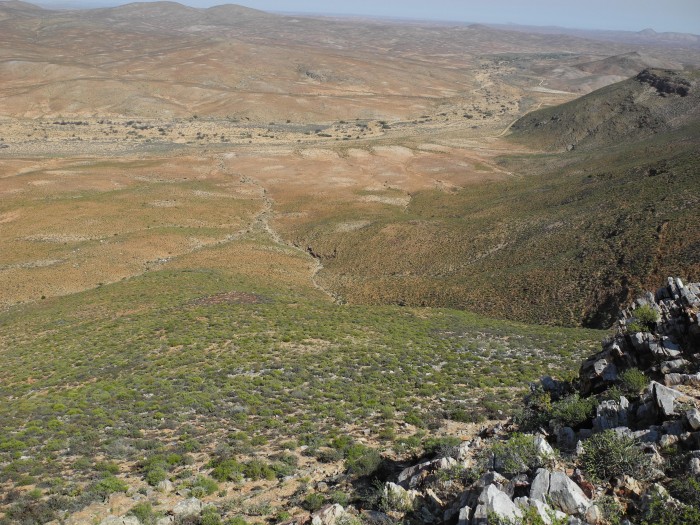 Thanks for this interesting and informative post, Chris. Super photos of all these plants in habitat. It helps to put our succulent collections into perspective.
Rod Smith

I always enjoy seeing plants in habitat, thanks for posting these.
Obsessive Crassulaceae lover, especially Aeoniums but also grow, Aloes, Agaves, Haworthias and a select number of Cacti.
Top

Not only great photos of succulent plants but the rock formations and lichen are very interesting too. The quality and clarity of the photos is setting a very high standard. Thanks for sharing Chris.
Cheers
Gary