I was waiting until Roger Ferryman’s account of the BCSS Conservation Project was published in the June Journal (Vol. 34, No. 2, pp 79-82) before adding a few more pictures of our trip so as not to unnecessarily duplicate them. I am afraid it will get added to as I get time to process the pictures.

The trip originally arose as “The Colin’s Trip”, since I gather Roger had promised Colin’s Parker, Cutler and Norton he would show them the Copiapoa’s in Chile sometime. He later asked if I would like to join so he could show me his Eriosyce habitats since Roger and I had corresponded about these plants long before he ever set foot in Chile. I dragged my feet for a while but eventually decided to go, therefore I guess I got made an “Honorary Colin“!

There were seven of us in the group. Pam and Roger Ferryman, Colin and Jean Cutler, Colin Parker, Colin Norton and myself. As most of us were over 60 and some of us 70 years plus, Paul Klaassen, who was doing a similar trip a week or two later with Pablo Weisser, dubbed us “The Zimmer Frame Trip”. Unfortunately, though both groups were there together we never met because our itineraries were always getting changed due to the earlier floods.

For those that do not know, 2015 was a year of exceptional rains in Chile with a lot of property being destroyed and old roads washed out necessitating changing where we went and where we stayed on a day to day basis.

You can get some idea of the floods from these video’s on YouTube:-

Some of the damage was caused by rivers overflowing with the flood water, but one hotel we stayed at said they were under 2 foot of water at one time through water simply running off the hills because the normally dry ground acts just like tarmac in that water does not initially sink in, but runs straight off.

Add to this, just before we went the areas we were going to suffered a fair sized earthquake and a tsunami in some of the coastal regions! It was amazing therefore how well the Chileans had managed to clear up the damage by the time we got there.

You can find details of Paul’s trip following us in his Cactus Trip Diaries here. Unfortunately the site lists the last entry first so you have to scroll right down to the bottom to start:-

The day we arrived, 15th October 2015, Roger took us to Ingrid and Richard Keim’s nursery at Olmue (pronounced Olm-way I found out!).

This was not that far from where Ritter settled for a time at Granzio in a property bought from Pablo Weisser‘s family. An account of which you can find in Paul Klaassen’s Diaries.

I only took a few shots whilst there since some of those were duplicated in the Keim's link above. 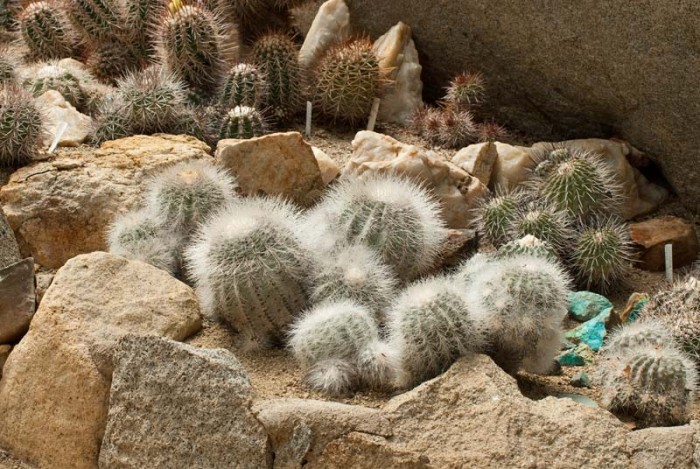 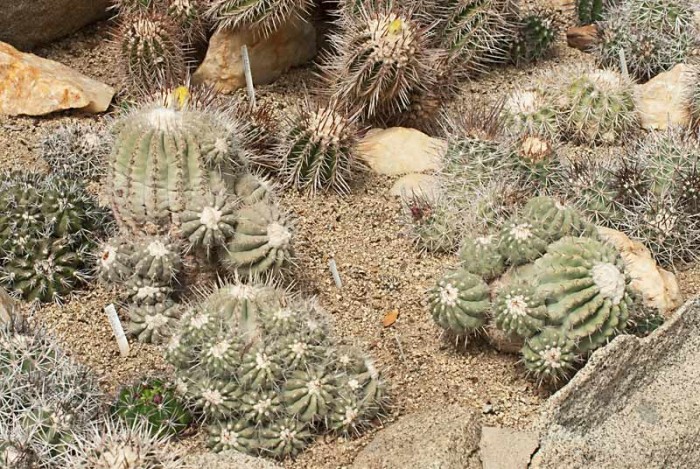 The next day we set off for Pichidangui, the type locality for Ritter’s Pyrrhocactus chilensis v. albidiflora (now usually just lumped into Eriosyce chilensis). E. chilensis has variable flower colours, pink at one end of it’s range and yellowish white at the other, but in the centre all can occur together. As shown in Roger Ferryman's picture here:- 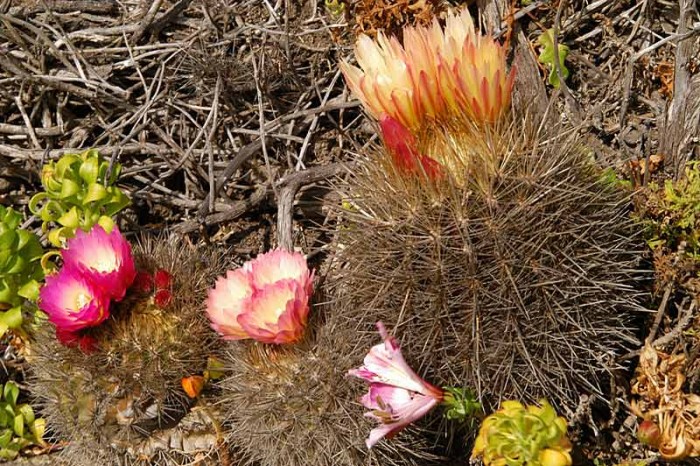 In fact Hildmann’s original publication of Echinocactuis chilensis in Schumann’s Gasamtbeschreibung der Kakteen of 1898 says “floribus flavis”, so why the pink flowered form has been mistakenly considered the type form I do not know? If you need to distinguish the flower colours, Ritter’s variety albidiflorus would seem to be E. chilensis type and it would be the pink flowered form that would need a varietal name. As said before since both flower colours can occur together in places they are all best just regarded as E. chilensis.

"Roger called his party the ‘Zimmerframers’"
Nottingham Branch BCSS. Joined the then NCSS in 1961, Membership number 11944. Cactus only collection.
Top

We set of early today (16/10/2015) for Pichidangui where Roger was a guest of honour to unveil the signs the BCSS Conservation Committee had provided as reported the June Journal, Vol. 34, pp. 79-82. and I found the rest of us had also been co-opted to represent the Society. As Roger says in his article, the plants are usually out of flower when the summer visitors arrive therefore they don't realise and trample on them. The signs are intended to hopefully prevent this happening.

As far as I could ascertain there were two different versions of the sign boards which were double sided, with different pictures on each side. 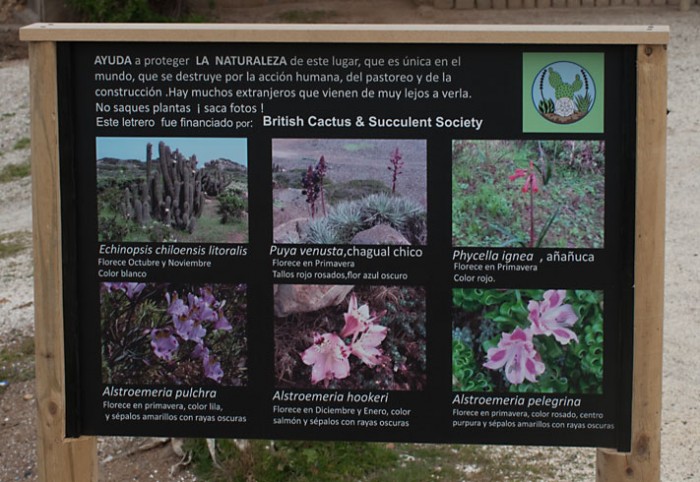 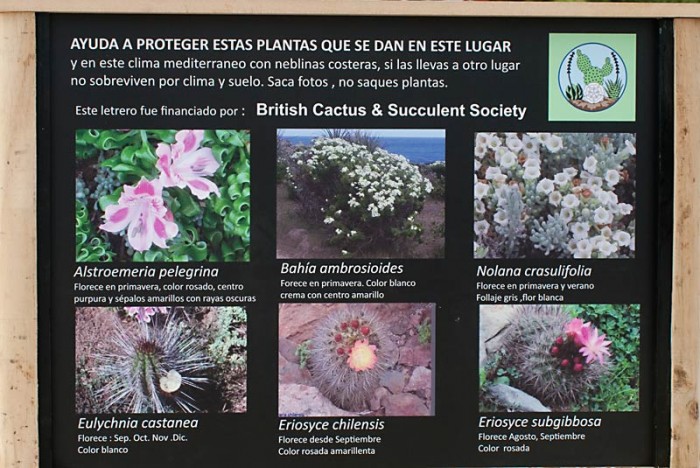 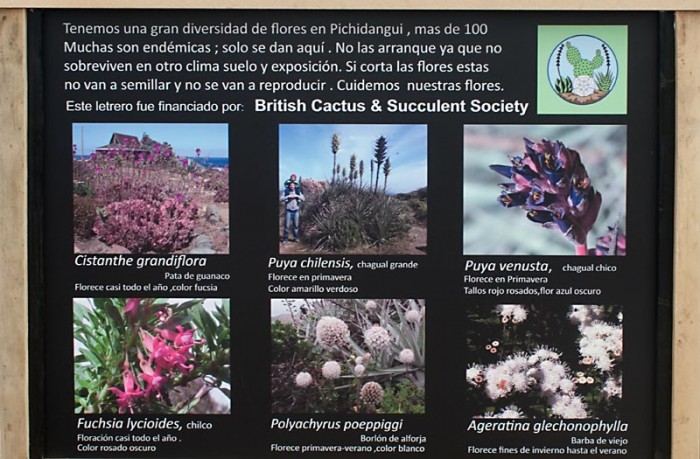 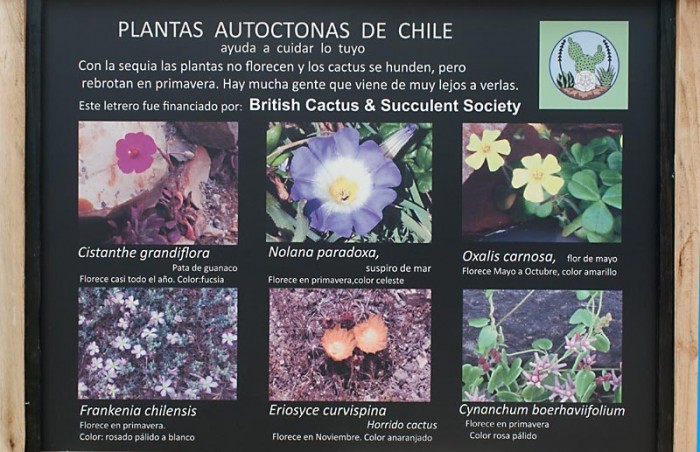 The Chilean botanist Adriana Hoffmann was also there, pictured here with Pam Ferryman. 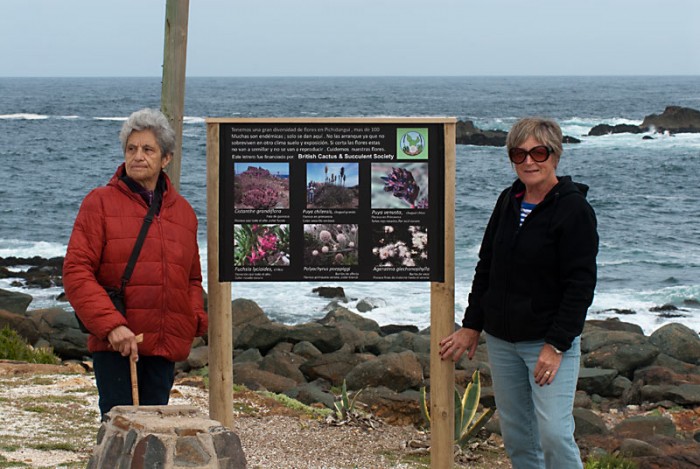 After the ceremony we explored the area for the plants the signs showed.
Nottingham Branch BCSS. Joined the then NCSS in 1961, Membership number 11944. Cactus only collection.
Top

Messrs Ferryman, Norton and Parker looking for plants at Pichidangui. As you can see from all the greenery it had been an exceptionally wet year. 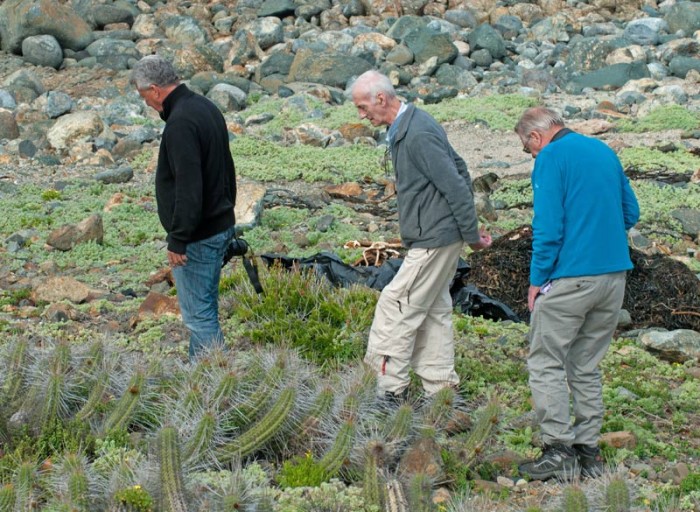 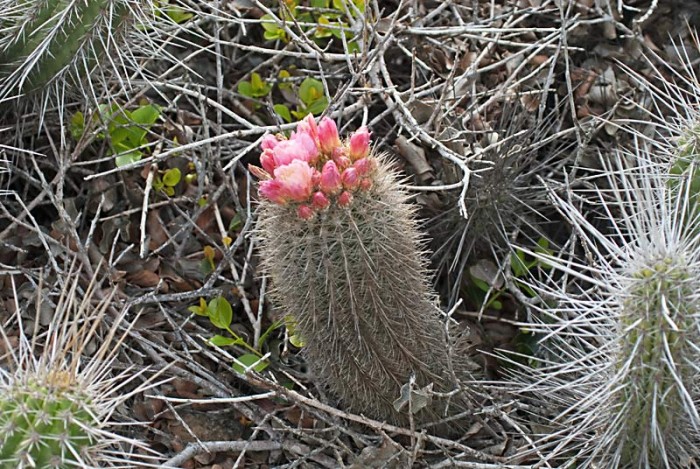 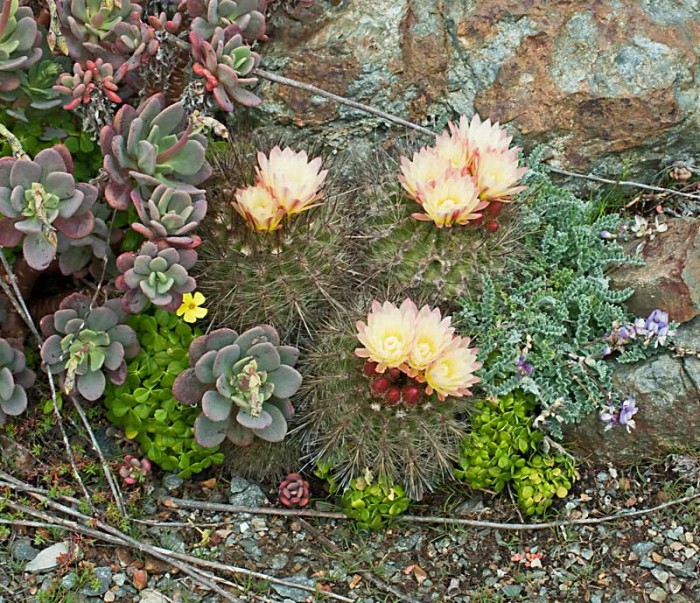 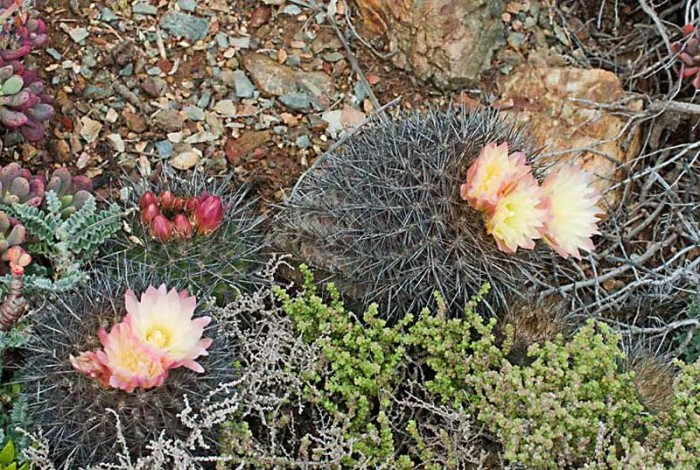 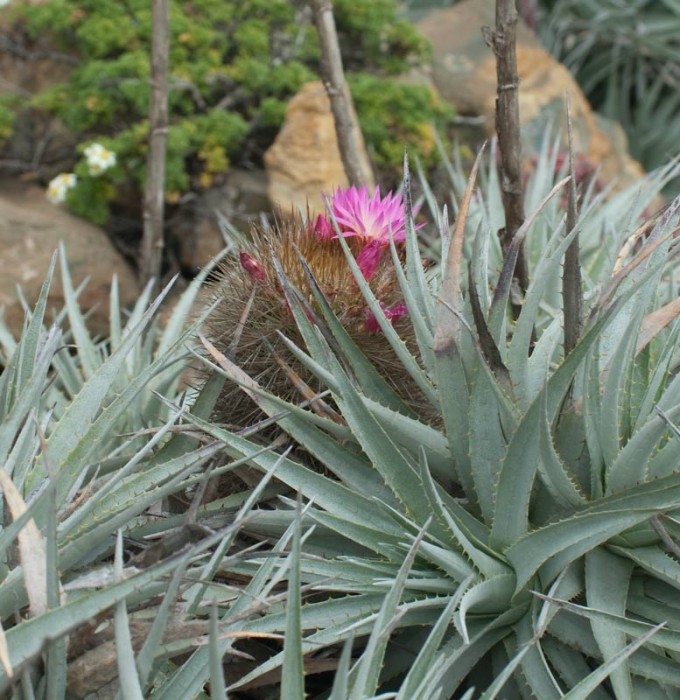 Pichidangui is the type locality for Eriosyce, or Pyrhocactus sensu Ritter, FR 223b Pyrrhocactus horridus v. mutabilis. This is often lumped into Eriosyce curvispinus these days. The previous difference being curvispinus having curved spines, but tuberisulcatus (syn horridus) having straight often awl shaped spines, though one gradually morphs into the other over their range. 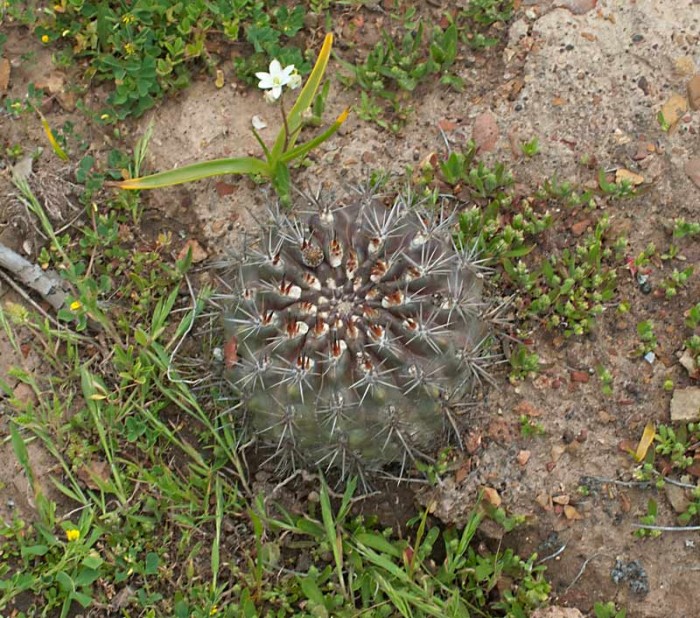 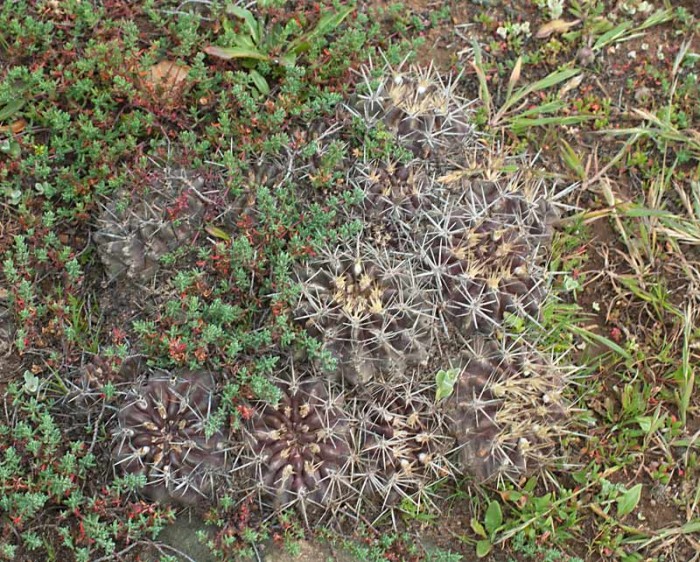 The Trichocereus growing here is T. skottsbergii I am told. 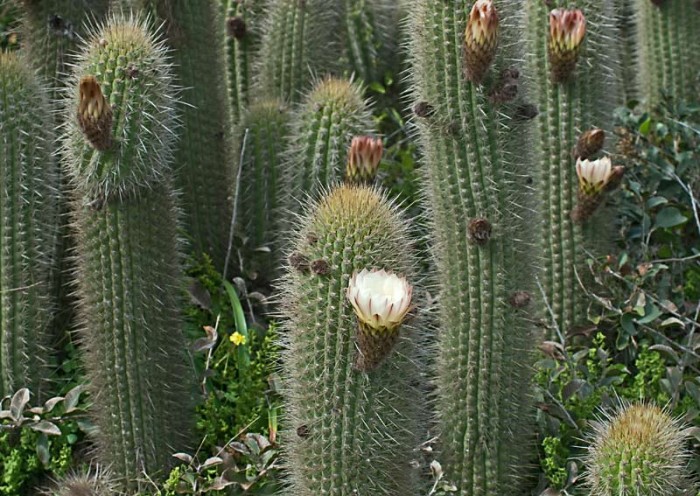 And the Eulychnia is E. castanea 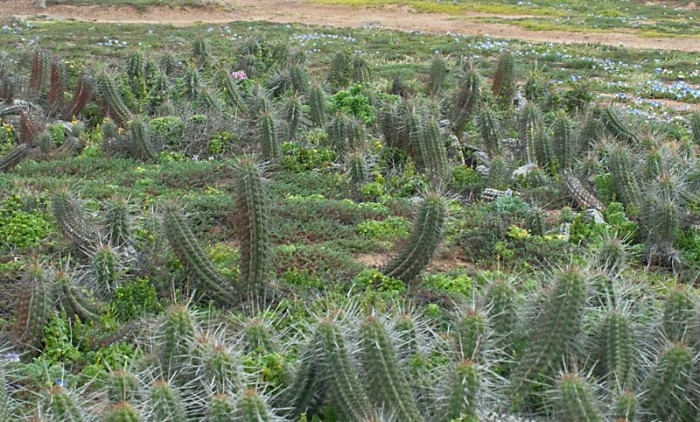 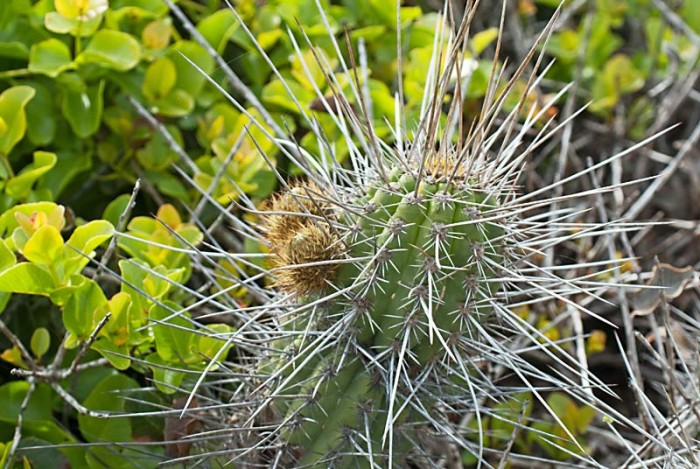 Good to see these images Dave.

I'm a bit surprised to see Oxalis carnosa on the signboards - as it's such a weed in cactus collections in the UK and I think it has escaped into Malta and the Canaries where it is smothering native plants! I suppose it's another example of a plant that does better away from its native habitat (and away from its pests and diseases). In any case definitely a 'Best Left In Habitat'! - or maybe in this case a 'If Only It Had Been Left In Habitat!'

Sorry I have not got around to further postings for this tour but I also have to convert all my images for projection and that means a different size to that for Forum use, so that gets priority at the moment.

There is a Mesembryanthemum named for Chile, even though it was obviously originally an introduction. But then there is an Opuntia named after Cambridge Botanical Gardens I believe, so not that illogical:-

A Mesemb growing on the rocks at Pichidangui, the only place I saw it.

You will appreciate what heart searching it took for me to waste a picture on an Other Succulent Steve, just for your benefit!
Nottingham Branch BCSS. Joined the then NCSS in 1961, Membership number 11944. Cactus only collection.
Top

Thanks for the thread Dave. It's great. I have to say though, that I got past the state of envy looking at the Chilean cacti that you saw in habitat: I'm now into out and out jealousy.

See what's in my greenhouse and you'll understand!
Top

I have not really started on the cacti yet Peter, there's all the Thelocephala's, Eriosyce and Copiapoa's yet to come. The problem is I have 1500 images to sort through and resize, many for projection as well as a different file size for here. The wonders of modern digital photography in that you can get all of those on one reusable Compact Flash card. The days of needing the expense of countless rolls of film and their processing are now gone, no wonder Kodak nearly went bankrupt! 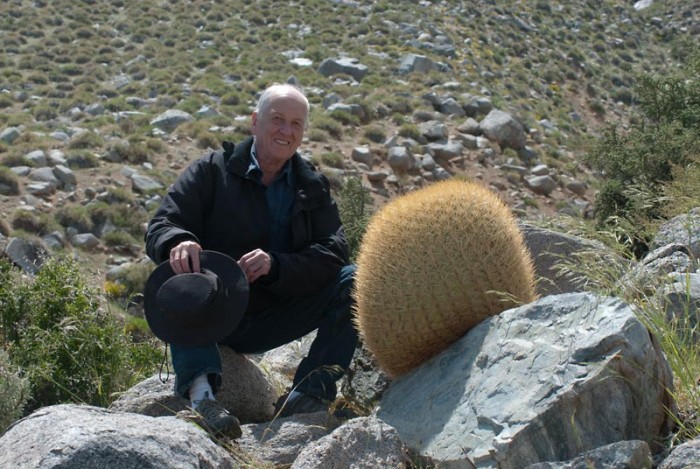 The large Eriosyce (sensu stricto) were all pretty well perfect and certainly show specimens. What surprised me was I expected the lower spines to have darkened, as in cultivation, which they usually had not. Whether it was the unpolluted air I do not know. What we would probably call the Neoporteria's (sensu Donald & Rowley, including Horridocactus etc) were often a bit more decrepit, similar to the old KK imports pre CITES.
Nottingham Branch BCSS. Joined the then NCSS in 1961, Membership number 11944. Cactus only collection.
Top

Nice mesemb Dave! Yes, it must have been a real struggle to take that shot!

How about posting it on the main Forum to get an ID - and shock a few forumites!

Thank you David for posting these wonderful pictures of your trip to Chile, especially the succulents and wild flowers!!
Are you giving a talk to Nottingham branch this year?