When it's a gneiss dome? Geology. One web page I found to explain the difference, says, Gneiss resembles granite, except that the minerals are arranged into bands. Sometimes it is difficult to tell the difference between gneiss and a schist because some gneiss appears to have more mica than it really does. If a rock shows minerals occurring in distinct bands, it is probably gneiss.

Schist? Well, whatever. I'm not a geologist, I just like what I can find growing on them. And with Namaqualand domes they are mostly all varying shades of brown with flecks of mica or quartz or a multitude of other minerals. But geology plays a big part when looking for succulents (and Conophytums in particular) in South Africa. We know that granite (or gneiss), sandstone and quartzite all hold (attract?) different succulents. Some are even found on shale and calcrete.

Dome? So called I suppose because they are almost always convex in shape – domical – which is a word I'd never heard until I Googled “granite dome”. They are an extremely common feature in Namaqualand, in fact there are many thousands of them in varying shapes and sizes. Just take a look on Google Earth between Springbok and Garies for example. Some are huge, some small, some steep, some only gently sloping and some occasionally are almost flat slabs only slightly exposed above the surrounding ground level.

This huge lump of exposed granite dwarfs the school and church below it. The lines where water runs down are obvious. 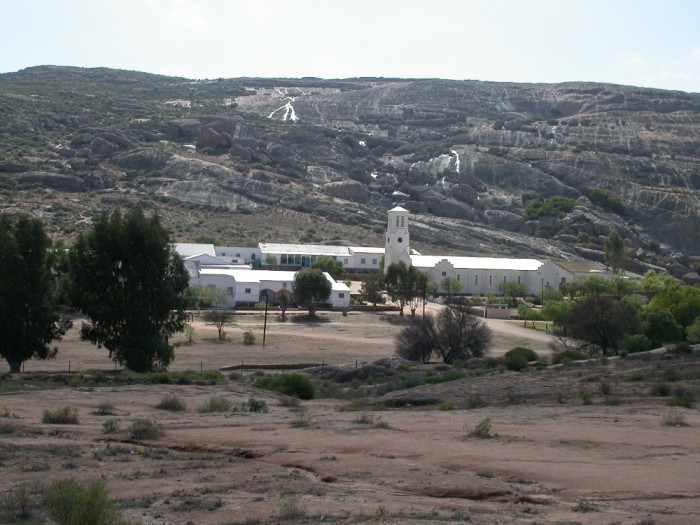 This pair of domes look quite small..... 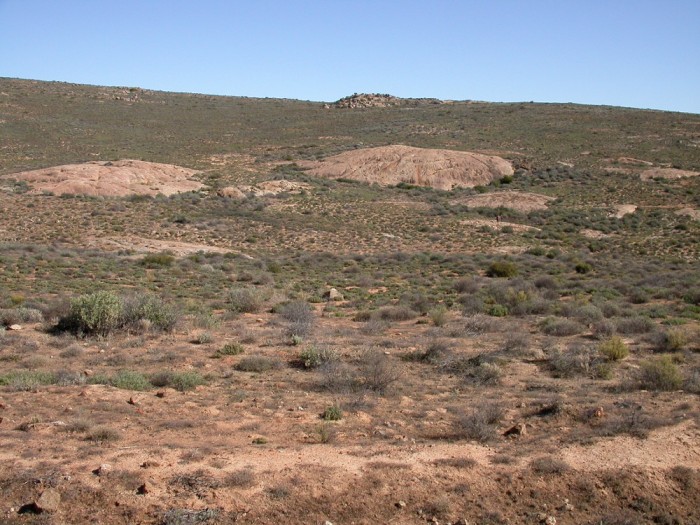 ....until you see the people for scale. 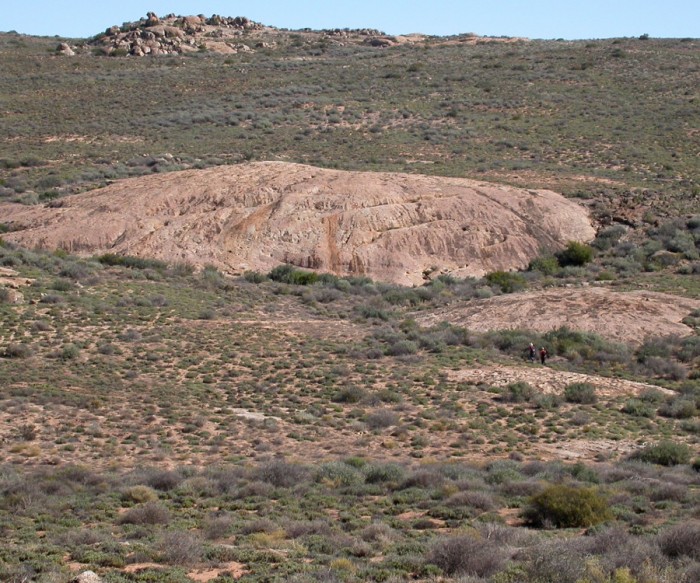 This one is only slightly exposed so not exactly a dome. But perfect for succulents. Others in the far distance look possible too, especially on the flatter tops. 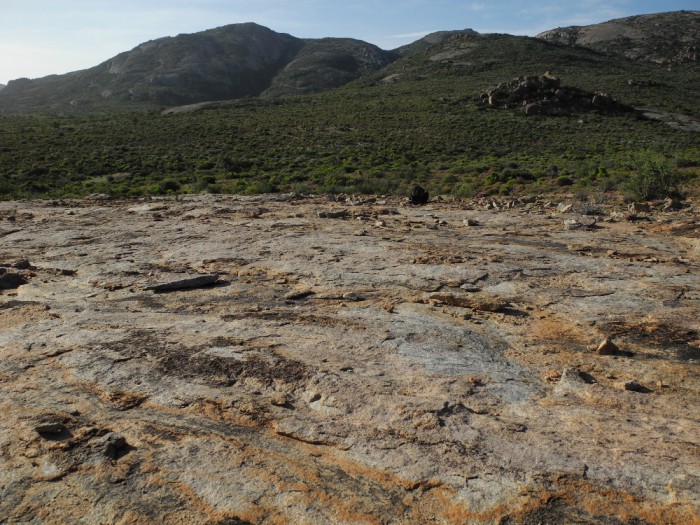 As far as succulents (and bulbs) are concerned, not all domes are made equal. One may have many plants growing on it and others which look to all intents and purposes identical, do not. If plant life is absent there are many reasons why that may be so. On some domes the rock may be so smooth that they are barren of all plant life. On others the surface will be so rough that moss and lichen will find anchor points. It's in here that seeds will be trapped with enough moisture and sustenance to grow. If a dome is found to have nothing growing on it, maybe it doesn't crumble enough to form the necessary depth of depressions or “pans” to collect the grit and sand where the plants can thrive. Pans must be level and not on too steep an incline. They cannot be too deep or too shallow. Such pans are always empty of plants.

Here a level pan containing Conophytum rugosum sits adjacent to another so deep it's holding water, so is obviously not a suitable habitat. 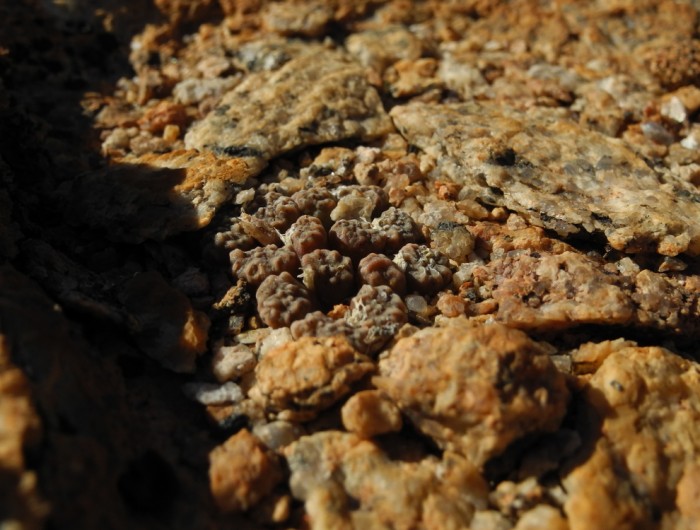 Maybe a specific type of granite doesn't flake or shear (exfoliate) to form the gaps and lips under which seeds can germinate and plants can find moisture and shelter to grow.

Here Conophytum buysianum and Adromischus filicaulis find what they to grow in a gap under a lip caused by exfoliation. When a loose piece is carefully removed (and carefully replaced!) we can see how much detritus has accumulated. Seeds windblown or washed under here have a good chance to germinate and grow on. Maybe the composition or the mineral content of the rock is not quite right. Such subtle differences make ALL the difference. Seeds germinate and spend their first few years actually living beneath the surface of the grit in pans. They manage very well on light filtered through the grit. Once mature and exposed a Conophytum will sit in a pan, it's bottom touching the solid base with it's roots spreading horizontally and it's top sitting level with the surface of the grit.

On the top of this dome there are pans flat enough to collect the necessary depth of grit and sand. A first only Crassula namaquensis looks to be taking advantage. But closer examination sees mature plants of Conophytum depressum level with the surface. 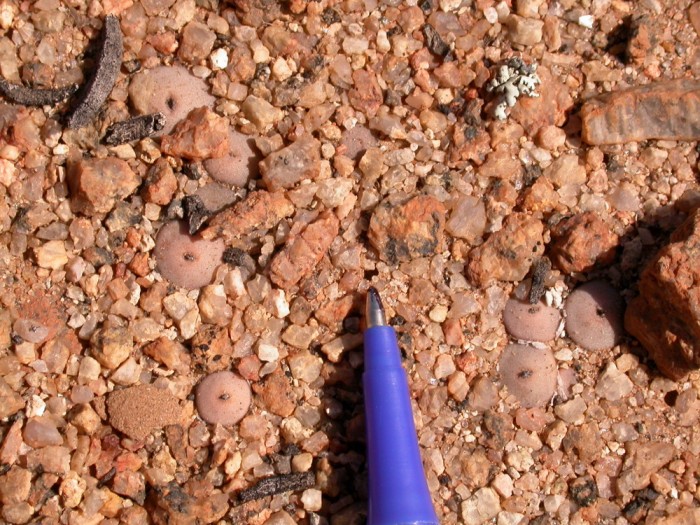 And blow away some of the grit to see that life goes on under it. Tiny C.depressum seedlings as well as others a few years old, all living sub-surface. 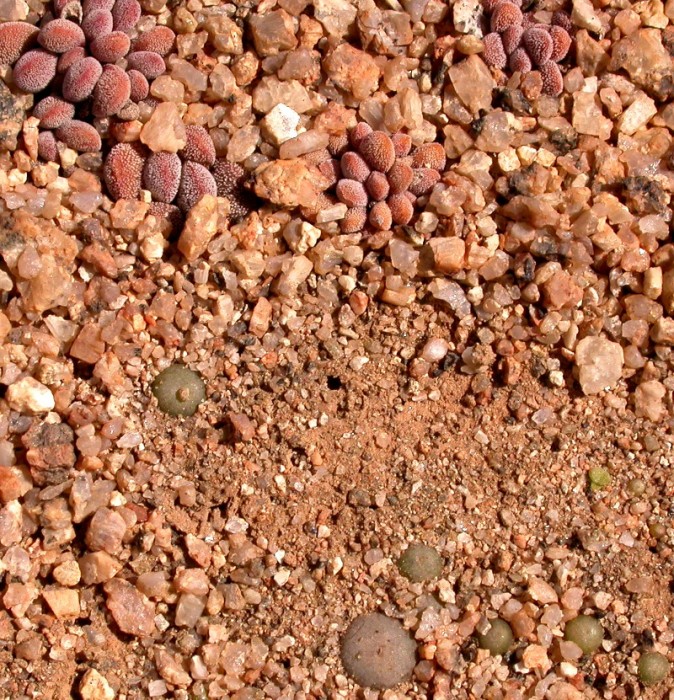 Adromischus marianiae looking rather sad after a dry summer. 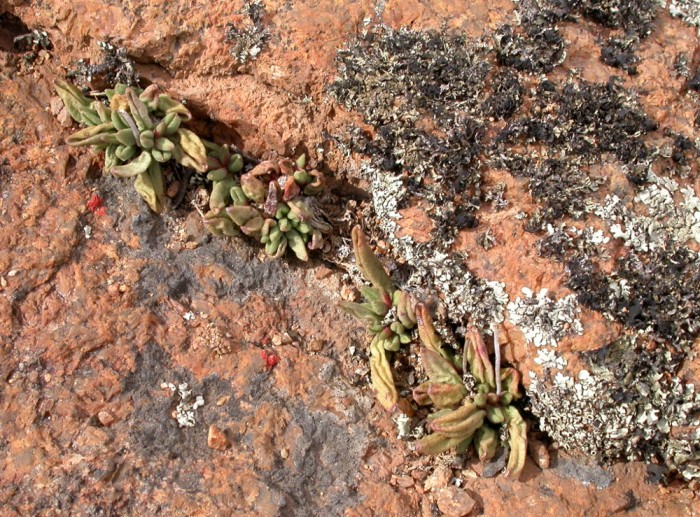 A bulb seed - Iridaceae? - found it's way into a fissure on this dome atop the Anenousberg. This particular dome to the south west of Springbok could well be granitic gneiss, because we found different Conophytums in bands - half way up was a different species to below and above it. Fascinating really. 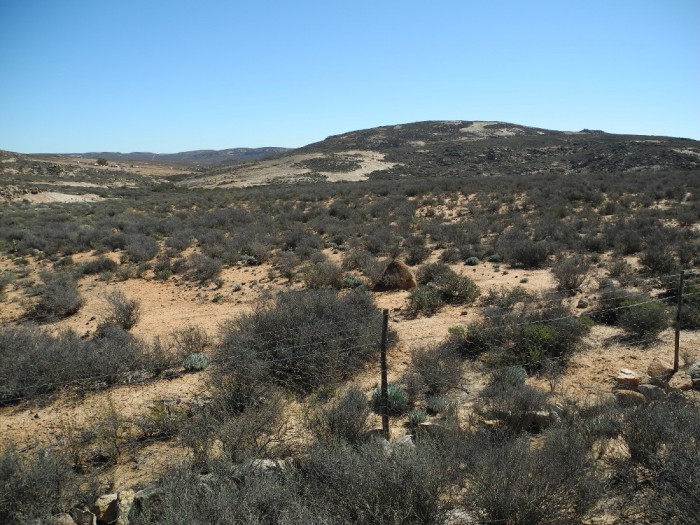 In Autumn during April 2015 and after getting permission from the farmer we managed to follow a track and park the car right at the foot. After only a few steps onto the rock, under some exfoliating fissures were Conophytum roodiae which were quite well advanced, turgid and green. The south facing shady aspect shown in the photo allows for a thick covering of dark moss and lichen to grow. They disappeared for quite a way until we got to the very top, where they appeared again but in shallow grit pans, along with C.pageae. One often finds different diurnal and nocturnal flowering Conos growing together.

C.pageae with an Ornithogalum? just coming into growth. These examples of C.roodiae, being much more exposed, were smaller and less advanced, only just cracking out of their sheaths. Interesting in itself – are these the same form of C.roodiae as at the base of the dome? Halfway up the dome was a level band of grey-black grit, obviously different to the main body of rock. Residing here and well camouflaged were plants of C.pelludium var. terricolor. Both fissure lips and pans hold moisture very well. The former due to their depth, amount of trapped detritus and shaded aspect. The latter may only be 1cm deep but hold water due to their (almost?) impervious nature. Water cannot really drain out of a pan so it has to evaporate. In both cases, once soaked, it will be a few days before nature takes it's course and they dry out through evaporation, giving more than enough time for any plants therein to take up all they need. No doubt a sustained period of rain and dull weather may even see plants rotting. We have seen Conophytums completely submerged on a few occasions. 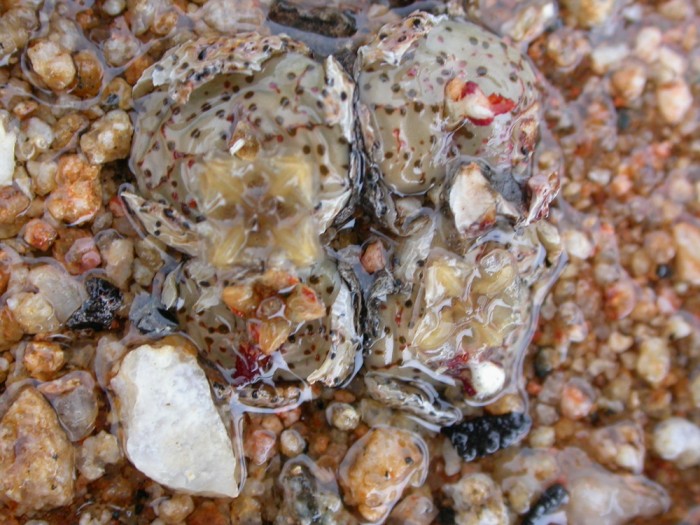 Domes are very delicate environments and so vulnerable to interference. We are very careful not to walk on or disturb grit pans. Some farmers know the plants on their land and understand and care about them. Others have no clue either through ignorance or indifference. On some farms where livestock is allowed to wander and graze where they will, the damage to plant life on domes is evident. The tops of plants under lips are chewed off and the pans are trampled and disturbed, the plants therein eaten or kicked out (Fig.12). These days with the popularity of granite kitchen work surfaces there is even more pressure on these amazing features with some farmers abandoning traditional farming, instead turning to drilling and blasting huge blocks from them. Think about that next time you order a new kitchen.....

This one is being exploited. Much of it has been taken away. Thanks to Alice Vanden Bon for the photo. I've no idea why I'm smiling here.....it's a tragedy really! Interesting how the crust is brown but the inside rock is grey Thanks to Alice Vanden Bon for the photo. 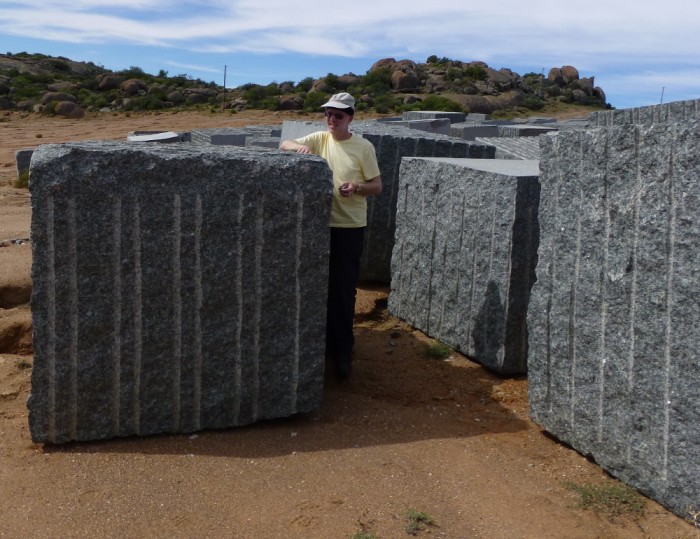 However it turns out, it's always exciting and a pleasure to walk on a dome, not knowing if it will be rich or poor as a succulent habitat. Many still will have never been walked upon. Look what happened in 2011.....we hiked up to a dome near Garies and found it covered in thick moss and lichen with a Conophytum in flower that we had never seen before. I described it as Conophytum youngii. Thanks Mike, it seems so.
Chris Rodgerson- Sheffield UK

Really interesting, Chris, I always enjoy learning about different rock types giving rise to different species, a fascinating subject. It also contains some very useful growing information, if interpreted properly. Maybe some of the conditions required are difficult to obtain in the UK but there are ideas there to help with cultivation.
Thanks for taking the trouble to post this.
Obsessive Crassulaceae lover, especially Aeoniums but also grow, Aloes, Agaves, Haworthias and a select number of Cacti.
Top

It is always very interesting to know where our favorite plants grow. Thanks Chris for sharing

Thanks Chris, this is very interesting and has made an enjoyable read.
Croydon Branch member, growing mainly cacti and Echeverias
Top

A fascinating series of photos and comments, Chris. Thank you.
Rod Smith

Thank you for a very entertaining (and educational) post, Chris.

A lot (most?) of the domes in Namaqualand are gneiss (metamorphosed granite) : they are all very old rocks (>500MY) that went through deep pressure and high temperature before being exposed as domes.