Yes, Melocactus was among the first cacti to be found by Christopher Columbus and other European sailors that crossed the Atlantic and arrived in the Americas. It seems that some plants were already taken back to Europe in the Columbus' ships, as novelties of the new world.

[quote]
Now a could of questions. How old do they need to be before forming the distinctive cephalium and are Discocactus closely related to them?
[/quote]

It depends on the species. Small species like Melocactus violaceus and Melocactus mantanzanus can form a cephalium as early as three years from seed, if growing conditions are optimal. Larger species can take longer, up to a decade or more.

Discocactus and Melocactus are closely related genera, closest to each other than to any other genus - they are "sister genera" in the nomenclature of botany.

[quote]
Extremely sad to see indeed! Some of the plants look many many years old and as Stephen says it can't be long until they could even become extinct in certain areas, the fact that the local people are now collecting harder to reach plants is more worrying. I expect they only sell them for meagre amounts and only to exist - feed their children etc. Does ernestii grow in many locations or only few?
[/quote]

Some of the plants are quite elderly plants - you can tell because of the very tall cephalium. The plants are sold by low amounts of money - one or two Real each. It is a subsistence activity, but one that has a very negative impact on the local flora (they don't collect only cacti - bromeliads and orchids are collected as well).

I do not worry much about Melocactus ernestii at the moment - this species is very widespread, it grows in rock outcrops over much of Eastern Brazil. And there are a number of populations that are found within protected areas, or grow in such inacessible places that collecting is practically impossible, places that at the moment are not under any threat.

My concern is with Melocactus salvadorensis - this used to be the only species seen in these roadside stands, and because it grows in soil and not in the rock outcrops, it was more accessible for collecting. If it is disappearing from the stands it means it is getting rarer and more difficult to find. I believe this species is already endangered - it occurs only in the eastern parts of the state of Bahia, a region that has experienced intense land convertion to human use in the past few decades, and whose original natural vegetation has systematically been destroyed. A study to investigate the status of the populations of Melocactus salvadorensis is in order, and something must be done before this species is extinct in the wild.

[quote]
I wonder what can be done if anything to put a stop to it? If there is a market for such plants and people willing to buy them then it's going to be impossible I would imagine.
[/quote]

Well, education is one thing that can be done - show the local people how to cultivate plants instead of collecting them from the field. This coupled with investments from the government to support the sustainable development of the local farmers. The establishment of a number of protected areas in the region also would help - and there are a few proposals made by local botanists to the government recommending places where protected areas should be created.

When I get back to Brazil next year, I will investigate this region in more detail, and see what can be done. Then I can report back here.

The most destructive things regarding cacti are farming and mining however. Whilst collecting plants may remove mature plants a lot of ungerminated seed still remains in the soil that will eventually replace the population if undisturbed. In some areas of the UK where plants have evidently died out soil disturbance will often uncover ungerminated seed and the population will spring up again. It depends on the longevity of the seed.

Just as with the flowering desert in Chile, it is possible some of the small cactus species my survive extreme conditions as seed with plants dieing out to regenerate in moister times through seed. Farming can destroy this possible future regeneration, as can mining. Many times people have declared plants extinct or endangered, but when somebody else visits the site a few years later small plants may be found in quantity.

However removing all flowering sized plants will eventually lead to extinction. But competition determines the population density and often it needs an older plant to die or be removed before a seedling can take it's place.

I agree with you Dave, but the problem with Melocactus salvadorensis is collection AND habitat destruction due to land conversion - farming. Melocactus ernestii grows in the rock outcrops and sure the populations can regenerate once the pressure is removed. But for Melocactus salvadorensis the places where the species grows are being destroyed as well, so no hope of preserving it unless protected areas are created in the region.

Thanks for the reply. Let's hope it's not too late for salvadorensis.

I wish you luck when you return to Brazil and hope the remaining plants can be saved/protected and the population increases once again.

A couple pictures of lizards eating Melocactus fruits, sent to me by a friend in Brazil. Here is the lizard Tropidurus cocorobensis eating fruits of Melocactus paucispinus:
[attachment 7764 Mpaucispinus_lizard.jpg]
Photo: Rosineide Fonseca.
Cheers, 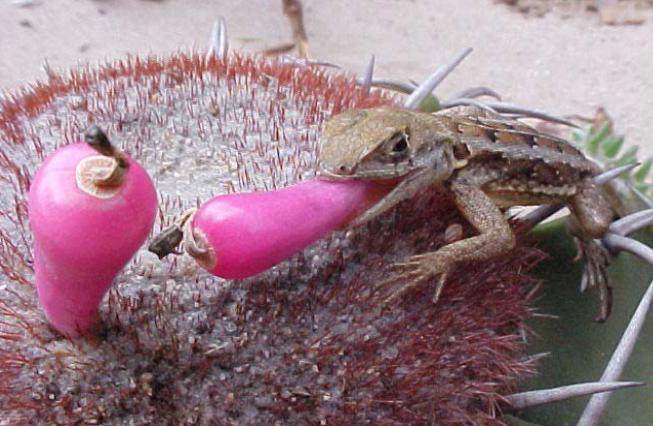 And here is the lizard Tropidurus cocorobensis eating fruits of Melocactus glaucescens: 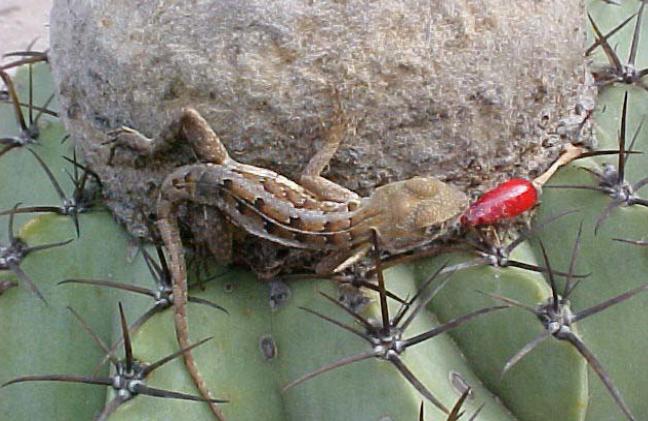 Great photos Marlon! I think the lizards must have eyes bigger than their bellies looking at the size of the fruits they're trying to swallow. Amazing that they don't become impaled on the spines, very close to his back leg in the first photo.

Amazing pics of lizards eating the fruits! I guess the most dextrous survive to pass on the clever climbing genes to their offspring. The others... hmm... get pranged.

That first lizard is going to choke, surely!

It's very sad to see all those mature cacti set out in pots like that.

Just like any other problem I guess, awareness is the key, and I wish you luck with the education and encouragement of local people to take care of the cacti. Perhaps there could be some subsidy for those involved? Or someone could guarantee to buy the plants they grow for a fixed price?

Please do keep us informed how this goes.
Happy carrier of Forby Disorder - an obsession with Euphorbia obesa.

NB. Anyone failing to provide a sensible name for me to address them will be called, or referred to, as Fred.
Top

I decided to piggy back my Melo ID request on this thread (which is one of my faves). I bought this in a well known flower market in London's east end one dank and miserable winter day (to cheer me up probably) for next to nothing. I re-potted it from the usual peat mixture it came in and noticed it had not much at all in the way of roots. Now I'm thinking about its provenance - those road-side pics from Brazil Marlon posted. It has survived the winter and I'm hoping it will grow some roots, though I've read that Melos are not crazy about being re-potted? 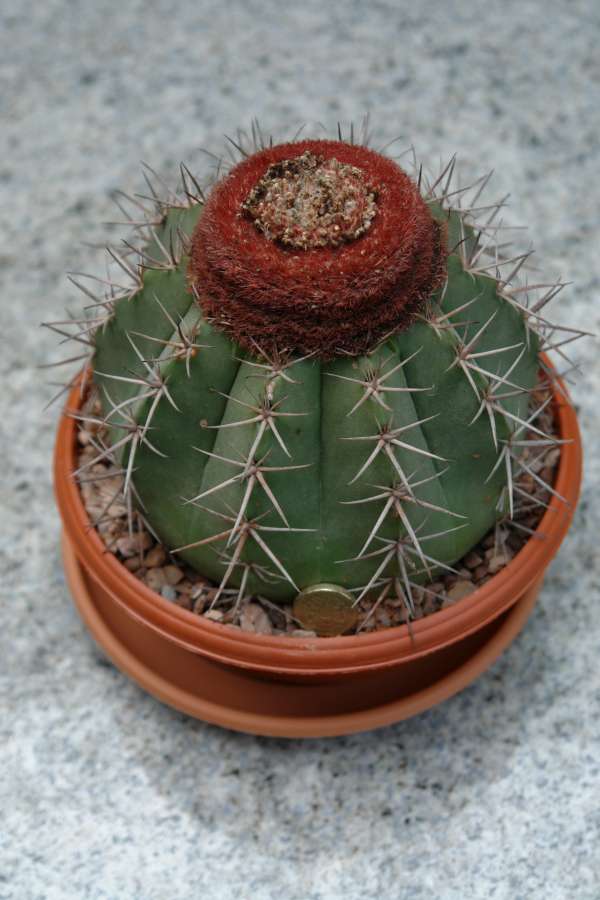