Wow great images. Good choice of topic for this month, with everything in the greenhouse needing a drink.
Some of those are very natural habitat like.
Phil I've looked online and Echinopsis or Lobivia ancistrophora is extremely variable I didn't spot any that looked as nice as yours.
Acid John that Mammillaria luethyi is a special plant and expertly grown.


Any tips can you (and I mean all those who have listed the pics of habitat like plants in this months thread)
Share on keeping these plants as close to nature as possible, which usually mean longer lived tuffer plants.
Meaning turbs arios some mams ect
I have read the stone eaters special,
Top

Obviously flat plants can come in all sorts and can be judged from all angles. I was a bit surprised by some of the presented photos, never thinking that of being 'flat', but of course they still are!

I am not much of a photo enthousiast. I will not think badly about some part of the photo being out of focus or when there is still a label or part of the pot to be seen somewhere in the frame. My judgement will be based on the plant themselves and how well they fit within the context of 'flat plants'.

For me there were three photos of plants that stood out.

In place three: the Aeonium tabuliforme of Edds is quite nice. This particular Aeonium has been on my mind already from the start of my succulents enthousiasme appeared in 1995 and one of the first I came accross the books I already had back than that I really liked to have. Strangely enough I never had one myself. 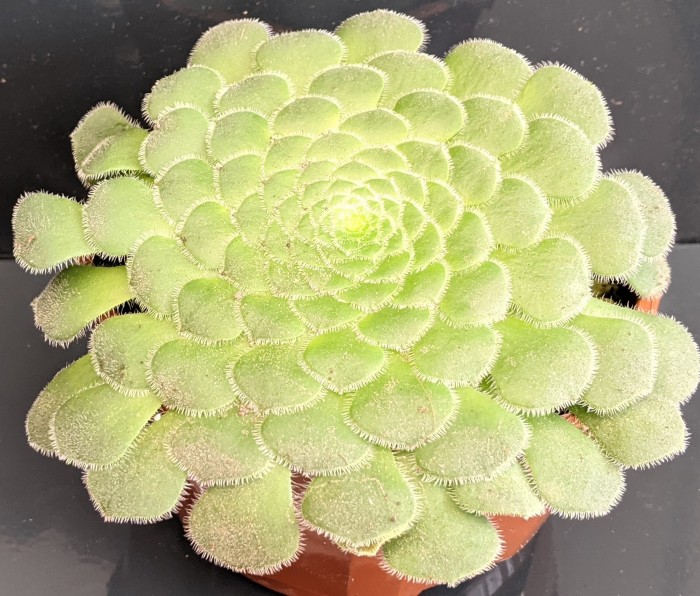 In place two: another one that caught my eye was the photo of the Turbinicarpus valdezianus of Acid John. These Turbinicarpus usually stay rather small, but for many still will be grown about as wide as they can become tall unless you give them a lean and mean diet and lots of sun. This is a very nice flat Turbinicarpus that just very barely did not made it to first place, although it might as well share the first place with the winner. So for me the winner of this month will be Phil_SK with a photo of Rebutia steinbachii (subsp. markusi?). This really is for me the type of photo I had in mind when I thought about the subject for February. Nice cute little plants that have grown in such a way they stay compact, even though for many other growers the very same plant grows more lush and bigger. I like the harsh and compact habitat look where the top of the plants stay below many of the visible pebbles and the rim of the pot. The bonus is the one pebble that is lying on top of one of the plants. Just a few more and you can't even see the plants at all...!

Over to you Phil_SK for the subject of the next month!
Top
Post Reply
32 posts