Mal L wrote: ↑
Tue Feb 25, 2020 6:46 pm
I agree with Diane with respect to not hiding the stock now when it might still be photosynthetically beneficial to the growth of the scion. Personally though I am always very wary of burying stocks later under compost and suggest using coarse gravel, which hides them well, and dries relatively quickly after watering.

But doesn't the gravel act as a mulch, condensing any evaporation, and holding it. In this case, in proximity to the stock.
Attempting to grow Aeoniums, Aylostera, Echinocereus, Echinopsis, Gymnocalycium, Lithops, Matucana, Rebutia, and Sulcorebutia.
Currently being wooed by Haworthia, and attempting hybridisation.
Top

If someone wishes to "bury" most of the stock to hide the fact that a plant is grafted then it is better to use something like gravel, that is non-absorbent and with some air gaps between stones, than use the normal compost. I doubt that the gravel will hold more moisture, and have a potentially more deleterious effect, than wet compost. The safest option is not to bury the stock at all, and that is up to an individual's sense of plant aesthetics. However, if you have a scion that will eventually grow large and heavy, but on a relatively tall and thin stock, then you might have to bury the scion at some point to help stabilise the plant. Of course, if you have one of those grafted plants beloved of garden centres, where the stock is a good few cms of soft, semi-tropical Hylocereus, then burying it in anything other than fresh air is probably asking for it to rot very quickly.
Malcolm
Stockport, UK
Member of Macclesfield & East Cheshire BCSS Branch

Collection mainly of cacti, though interested in a much wider variety of plants than I can accommodate!
Top

Burying the stock plant is also a method to promote root growth in the scion. I've done this on a couple of occasions. When successfull, the scion forms roots and the stock plant dies.
http://www.cactusglobe.com
Top

Interesting... The root stock that has been used measures maybe 5 cm top to bottom (excluding the roots, which are fairly minimal at the moment), and it is about half and half above and below surface. I'm minded to leave it as it is for this year, and see if it survives, then maybe think again this time next year...
Top

Have you identified the rootstock? How are you keeping it at the moment, temperature and watering-wise, if the roots are sparse?
Top

From the little I can see, it looks like Harrisia jusbertii, which is a pretty tough stock, and good for grafting. (I may be wrong, of course...)
Diane - member of Kingston branch

I've just Googled what Diane suggested, and I think she is right (I am in awe of your knowledge!), it is "four sided" but to be honest there is so little of it that its hard to say more... Having only potted it up a week ago, it has yet to be watered. I'll establish a regime for it presently. In that regard, from what I read, they do like a decent amount of water in the summer months? It lives indoors (I don't have a greenhouse), at the moment in the kitchen window (centrally heated) and in due course it will be moved to the South facing lounge window where it will get plenty of sun and warmth. As mentioned before I don't hold out a lot of hope of success, I'm very much an amateur, but I will be trying...
Top

Well, one year on from what was one of my original posts, about the Uebelmannia Pectinifera that I'd purchased from an on-line retailer and was rather disappointed with...

The discussion and advice that ensued decided me to give the little plant my best shot. For the last year it has been lovingly fed and watered, and given the best seat in the house sunshine wise. And here it is now - 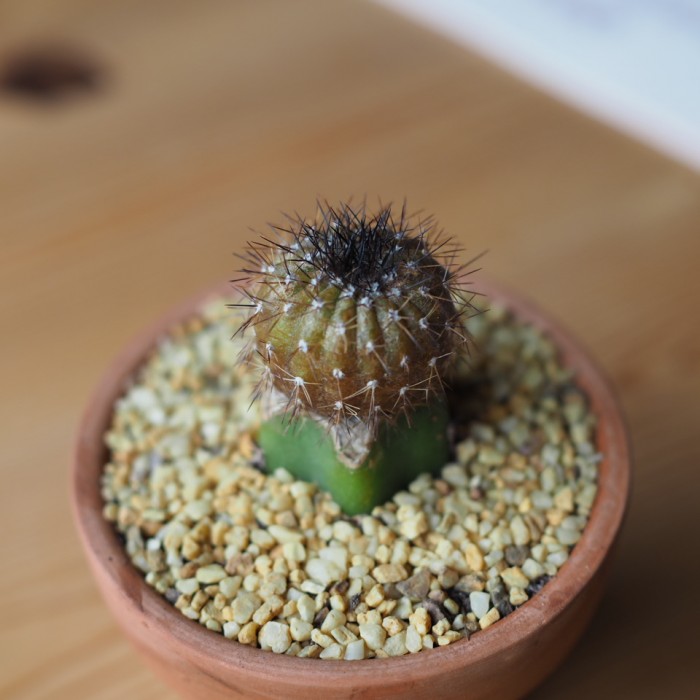 As you can see, there hasn't been a lot of what you might term progress! When I first posted, I estimated the size of the scion at maybe 2 cm diameter, and it is now maybe 2.2 cm..! Is that what you might consider a typical rate of growth for a grafted example of one of these, or am I wasting my time?... I've just refreshed the compost in anticipation of the new growing season, but beyond that I don't really know what else to do. Any advice much appreciated.
Top

You may possibly have speeded it up more if you had put it on a much taller rootstock.
Acid John
Top
Post Reply
39 posts