Nice plant! Anyone else on the Forum like epiphytic cacti?
Top

I have a Lepismium, but not in flower therefore not worth posting. Not wanting to hijack the thread Phil, but as nobody is posting Lepismiums anyway just to answer ALI.

As to epiphytes I grow all cacti, but stick to species rather than the hybrids. Which in the case of epiphytes are usually much harder to obtain and often being tender can be harder to grow.

I managed to obtain a small start of what is a Schlumbergera truncata clone said to originate from Countess Orssich in Brazil, therefore supposedly originally collected material. I am sure there are still genuine truncata in general cultivation since they are easy to propagate vegetatively, but so much random hybridisation has gone on you can no longer be sure which they are.

Sorry the photo is not too good, it was a quick hand held snatch shot in poor light conditions. 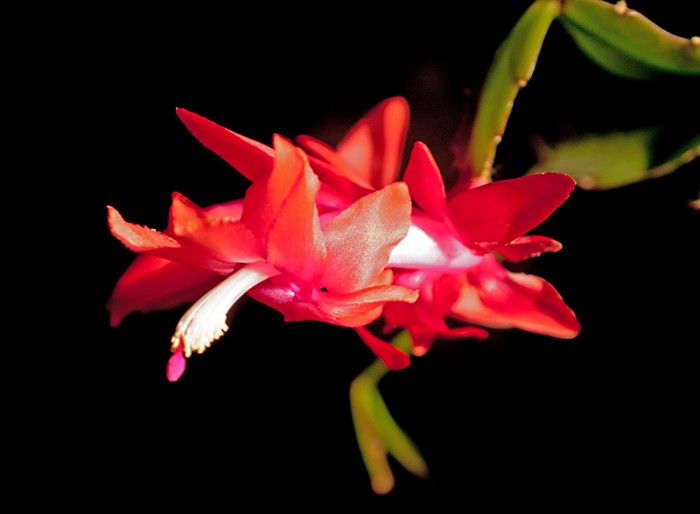 It seems to agree reasonably well with the picture of Hookers designated as neotype by Nigel Taylor, including the pinkish/lilac stigma lobes shown in the article pages 12-15 In the Cactus Explorer link below.

"The species was first properly named for science by Haworth in 1819 as Epiphyllum truncatum. His name was based on living specimens growing at the Royal Botanic Gardens, Kew in 1818. (However these do not appear to have been preserved, so an illustration published by W.J. Hooker in 1822 was designated as the "neotype" by N.P. Taylor.)"

Sorry to deviate from the thread Phil, but nobody was posting Lepismiums anyway.
Nottingham Branch BCSS. Joined the then NCSS in 1961, Membership number 11944. Cactus only collection.
Top

Ali Baba wrote:Anyone else on the Forum like epiphytic cacti?

Yes, though I haven't any Lepismium and (other tan some hybrid epis) only have a few species.

DaveW wrote:Sorry to deviate from the thread Phil, but nobody was posting Lepismiums anyway.

I'm not terribly precious about the purity of the discussion. I would hope that none of us needs the excuse of a plant of the month topic to discuss a plant or group of plants, though. The main forum could be a whole lot livelier if we stopped thinking, as I do, "that's not worth starting a thread about" and just posted more stuff about our plants.

Just to tag on here as the thread is about finished instead of starting a new thread now.

For those interested in species epiphytic cacti rather than the hybrids, one of the best collections of pictures (apart from the New Cactus Lexicon) is here:-

As this thread is about Lepismium just to show there are some attractive flowered ones becoming available, even if the flowers are often small. They do produce attractive fruit after flowering too:-


Thanks Dave, it was an interesting video.
Regards Keith.